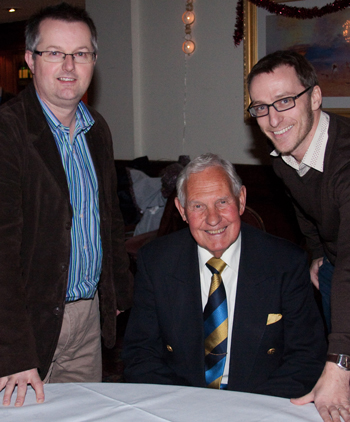 Scottish Television arranged a special screening in the Commodore Hotel when former Rangers and Scotland goalkeeper and Scotland manager Bobby Brown was the guest of honour.

The series is called ‘The Football Years', and the first one, ‘The Year of the Scots', was shown on Thursday January 7. It was produced by Glasgow man Brendan O'Hara (left), a Sky TV producer for many years who now lives in the burgh and freelances for STV.

The programme was about 1967, the year when Bobby Brown's Scotland team beat Sir Alf Ramsay's new world champions England 3-2 at Wembley in their first match after winning the Jules Rimet Trophy.

Film of the match included the famous sequence of Jim Baxter playing ‘keepy-uppy', and in an interview Bobby said of that moment: "I was going berserk!"

He also told how he went for a walk after the post-match dinner at London's Café Royal and came across a drunk Scottish fan who told him: "See you! England 2, Scotland 3, and don't you forget it!"

Bobby, who was born in Dunipace, Stirlingshire, has lived in the burgh for many years, first with his late wife Ruth and family in Rowallan Street and since her death in McLeod Drive. He is now 86 — and looks years younger.