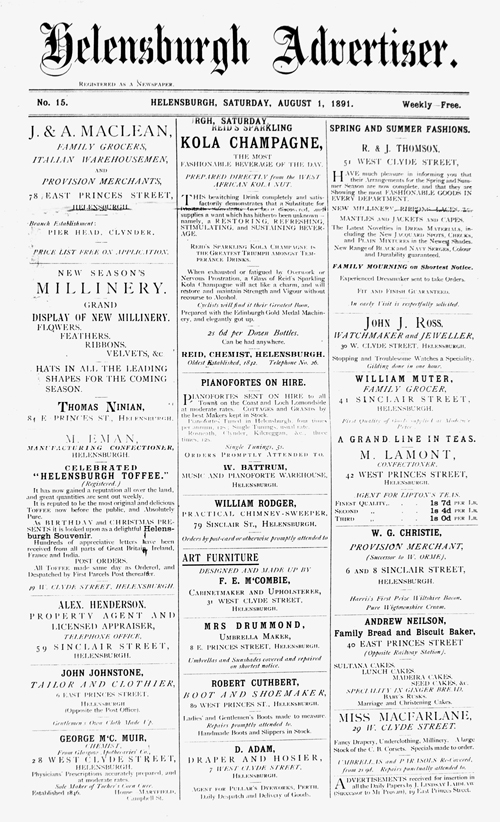 THE current local weekly paper the Helensburgh Advertiser is actually the second burgh paper of that name.

The original Advertiser was printed and published by J.Lindsay Laidlaw at 19 East Princes Street, and was launched in 1891 as a weekly free newspaper.

As normal at that time the front page is entirely advertisements, and in papers of those days the advertisements can be as interesting as the news.

In edition no.15, datelined Saturday August 1 the advertisers included W.G.Christie, Provision Merchant of 6 and 8 Sinclair Street, the W.Battrum Music and Pianoforte Warehouse, and J.&A.Maclean, Family Grocers and Italian Warehousemen of 78 East Princes Street.

Mr Battrum sent pianofortes on hire to all Towns on the Coast and Loch Lomondside at moderate rates, and, for those in Helensburgh who owned them, would call four times a year to tune them for 12 shillings. The same fee, however, only paid for three visits to Rosneath, Clynder or Kilcreggan.

Fondly remembered to this day is the main product of M.Eman, Manufacturing Confectioner, of 49 West Clyde Street, maker of the “Celebrated Helensburgh Toffee (Registered.)”.

It came in litle maroon boxes, wrapped with a ribbon, and was very good. Or, as the advertisement modestly states . . . “It has now gained a reputation all over the land, and great quantities are sent out weekly. It is reputed to be the most original and delicious TOFFEE now before the public, and Absolutely Pure.

“As BIRTHDAY and CHRISTMAS PRESENTS it is looked upon as a delightful Helensburgh Souvenir. Hundreds of appreciative letters have been received from all parts of Great Britain, Ireland, France and India.”

Not hiding its light under a bushel either was Reid’s Sparkling Kola Champagne, from Reid, Chemist, Helensburgh, established 1842, telephone no.26. Costings two shillings and six pence per dozen bottles, this most fashionable beverage of the day, prepared directly from the West African Kola Nut, is said to be “the greatest triumph among Temperance Drinks.”

The only business featured in edition no.15 which is still trading is the Imperial Hotel. It did not advertise in the four-page free weekly newspaper, but it gained a mention in the first batch of news on page two, under the heading “Exhibition Billiard Match”.

This took place on Tuesday evening between Mr J.G.Sala, champion billiard player of Scotland, and Mr H.McNeill, champion pool player of the world, in front of a large attendance. The report continued . . . “The match consisted of 500 up spot-barred, and five games of pyramids. Victory rested with Sala, as he scored both games. The game of pyramids resulted in two wins for McNeill and one for Sala.”

The main item of the week was a West Highland Railway Dispute, and it was hoped that the North British Railway Company and Messrs Lucas and Aird would come to an amicable arrangement. “No more men are to be dismissed meanwhile, another three weeks grace being allowed for the completion of the negotiations now going on,” the paper reported.

One night early in the week there was a boating drama in the Gareloch, a Shandon man and two girls out in a sailing boat near Clynder being thrown into the water when the boat capsized. All ended well, however. Said the report: “Some yachtsmen launched a boat and rescued just in the nick of time the trio from a watery grave.”

Also in the Gareloch was H.M.S. Empress, the school ship moored off Rhu, where a newsworthy event took place on Monday last. Some 300 boys were presented for examination in drawing by Mr Hartley, the drawing inspector, drawing having been made a class subject for the first time in the ship’s history.

A popular feature of many newspapers today is News in Brief (or NIBS to those in the trade). In the now defunct Helensburgh and Gareloch Times these were called Brevities, and in the 1891 Advertiser they were called Mems — presumably short for Memorandums. Here are just four:

The same page also contains the Public Notices, and Mr Joe Edmonds, the Accomplished and Successful Negro Performer, begs respectfully to announce that he will give a Grand Concert in the Victoria Hall on Monday. The artists on the bill include Mr Charles Raymond, the Banjo and Pedestal Phenomenon, and Mr Joe Lanty, the Celebrated Dutch Vocalist, Irish Comedian, and Dancer.

The publisher, J.Lindsay Laidlaw at 19 East Princes Street, had his own advertisement, a 14-line poem about the books the publisher sells. It concludes: “All books in print you may at LAIDLAW’s buy; if not in stock he quickly will supply.”

Beside it is an ad from John Halsey, Butcher, 33 Sinclair Street, which states: “ONLY Scotch Beef and Blackfaced Mutton sold. A TRIAL SOLICITED.”

The back page is, like the front, all advertising, and one is from the Salvation Army Bank, 42 West Princes Street, which offers advantages to Depositors which should obtain for the Bank very favourable consideration.

The Bank’s aims are to secure three desirable objects — fair interest, sound security, and the extension of the Kingdom of Jesus Christ . . . the original Direct Line perhaps!

It goes on to say: “The two first-named will commend the undertaking to all classes, and the third must strongly appeal to those who are desirous of helping the Salvation Army to make fresh efforts to spread the Gospel, and thereby improve the condition of the people.”

There is a direct link between that first Advertiser and today’s. The late Craig Jeffrey, who started the second paper of that name, took over the small printing firm of George A.Milne — then situated behind Woolworths in Colquhoun Street, and George Milne had been J.Lindsay Laidlaw’s successor.

Craig found a number of pieces of equipment in the premises bearing Laidlaw’s name, and, when he launched his Advertiser as a wall sheet 50 years ago in May 1957 he used an old printing block of the Helensburgh Advertiser masthead, which almost certainly was the block used for the original.

In August 1957 the wall sheet became a newspaper but, while the title was retained, a new masthead was introduced.