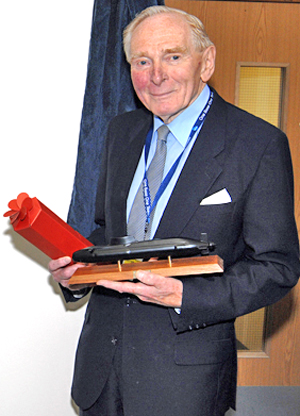 A LEADING Clyde shipbuilder who lived for many years in Shandon — as did shipbuilding pioneer Robert Napier over a century earlier — died peacefully of cancer at home on October 10 2008 at the age of 85.

Sir Robert Easton, CEng, FIMechE, FIMarE, FRINA, chairman of Yarrow Shipbuilders and pioneer of naval design, lived with his wife Jean at Stuckenduff, and was best known for steering the Clyde operation through the 1970s and 1980s — its most turbulent period.

He managed to keep the basic workforce together while Royal Navy orders thinned as defence spending was repeatedly cut, and maintained Yarrow's position as the only profitable shipbuilder on the Clyde.

Born Robert William Simpson Easton in Govan on October 30 1922, he was educated at Glasgow’s Royal Technical College — later part of Strathclyde University — and started his 43-year career as an apprentice at the Fairfields shipyard in Govan.

He then worked as an estimator in 1951 at Yarrow, Scotland's last main warship yard, and rose to become sales director, deputy managing director and then chairman and managing director. He also served as vice-president of Clyde Shipbuilders from 1972 to 1979.

As Britain's position as a warship builder to the world was gradually eroded by foreign competition, Sir Robert took up the challenge of making Yarrow work. He was involved in the launch of 103 ships and presided over a turbulent period of Clyde shipbuilding history.

Sir Robert spoke of limited successes at Yarrow in 1972 having brought the company back into the black — despite what he called the attitude of the unions. He has been credited with helping to transform the industry from a one-time ‘holiday camp’ into a vibrant enterprise.

He was a director of Yarrow Shipbuilders Ltd, when it merged with four other companies under the UCS banner in 1967. Three years later he became deputy managing director, and the following year UCS workers launched a work-in which became one of the most celebrated disputes in trade union history.

When Edward Heath's government refused to give UCS a £6m loan when it went into receivership, the union decided to stage a ‘work-in’ and complete the orders that Yarrow's and the other companies had in place.

Despite this, there were mutual recriminations between the management and workers as to who was responsible for the collapse of UCS.

Public sympathy and political support ensured that, in February 1972, Heath agreed to retain two of the yards, Yarrow and Fairfields, as Govan Shipbuilders. Both remain in operation today as BAE Systems Surface Fleet Solutions.

Sir Robert augmented Yarrow's strengths in the domestic market with international orders secured through his capacity for forging relationships in the world of shipping, and in 1980 he was awarded the CBE.

In 1985 YSL was sold to GEC. He had supported the idea of an employee buyout when it became clear the warship yards were to be sold off, but it was not to be. The following year he received the Special James Watt Trophy for services to engineering in Scotland.

Sir Robert was chairman of the Clyde Port Authority from 1983-93, GEC Scotland from 1989-99 and GEC Naval Systems from 1991-94. He was knighted in the 1990 New Year's Honours List — the same year as he became an honorary vice-president of the Royal Institution of Naval Architects.

As well as being a shipbuilder living in Shandon, he had even closer link with Robert Napier. Both served as president of the Institution of Engineers and Shipbuilders in Scotland — Napier from 1863-5 and Sir Robert from 1997-9.

He chaired the Pathfinder consultation group on defence, one of a number of such groups set up in 1999 to identify opportunities and problems facing them and issues that the Scottish Parliament could address to help the sector.

Outside shipbuilding he was a director of the Glasgow Development Agency, the West of Scotland Water Authority and Caledonian MacBrayne. He was a Freeman of the City of London, and a member of the Merchants House in the City of Glasgow.

In 1993 he was installed as Chancellor of the University of Paisley and was given an honorary doctorate.

He was a life member and trustee of the Seagull Trust which seeks to provide canal cruising and other opportunities for recreational pursuits for the disabled. In his spare time he was an enthusiastic golfer and a keen sailor.