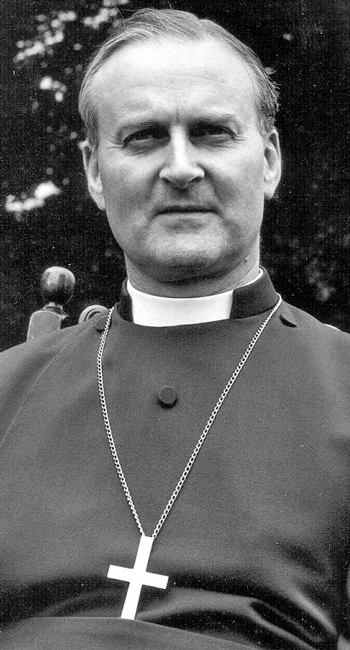 A HELENSBURGH man who became a priest went on to hold two of the most important offices in the Church of England.

The Right Rev Patrick Campbell Rodger, who was born at Southcourt in the burgh on November 28 1920, the son of a prosperous family, was Bishop of Manchester from 1970-78, then Bishop of Oxford until 1986, and a leading figure in the ecumenical movement.

His father was Patrick Wylie Rodger, a fire-clay manufacturer, who lived at Southcourt with his wife Edith Ann Steven, whom he had married on April 19 1906.

Educated at Cargilfield, Scotland’s first prep school, then at Rugby where he was head of school, he went to Oxford as a scholar of Christ Church.

He was commissioned in the Royal Signals towards the end of World War Two, and then prepared for Holy Orders at Westcott House, Cambridge. A member of the Scottish Episcopal Church, he returned to Scotland to become curate at St John's Church, Princes Street, Edinburgh, from 1949-51.

He then spent three years as chaplain to Anglican students in Edinburgh, and this led to his appointment in 1955 as study secretary of the Student Christian Movement — at that time a substantial organisation, though in decline.

He held this post for three years, serving also as a curate at St Barnabas Church, Woodside Park, in north London, but then returned to Scotland as rector of St Fillan's, Kilmalcolm, with St Mary's, Bridge of Weir.

In 1961 he went to the World Council of Churches in Geneva as executive secretary of the important Faith and Order department, and he organised and wrote the official report of the Fourth World Conference on Faith and Order held at Montreal in 1963.

However, his cautious, scholarly approach to church unity questions put him out of step with many others at the Council, who had become impatient with Faith and Order matters and turned instead to the problems of world poverty, racism and nuclear weapons. It led to an extraordinary phase of his life.

In 1965, a new general secretary was required, and the executive committee chose him — and announced its choice. There was consternation among other members of the Geneva staff who felt that they could not work under his leadership and among some of the member churches.

After much wrangling, the nomination was overturned, to the great embarrassment of all concerned. He was the victim of gross ineptitude on the part of an organisation committed to justice and unity.

But he never expressed anger or bitterness, simply continuing his work in the Faith and Order department. The way he handled his disappointment and humiliation won him universal admiration.

Eighteen months after the leadership crisis he was invited to become Vice Provost of St Mary's, the Episcopalian Cathedral in Edinburgh, and the next year he became the Provost.

In 1970 he was called to become Bishop of Manchester, which represented an emphatic vote of confidence by the Anglican church.

Five years later he was offered the Archbishopric of York when Donald Coggan moved to Canterbury. He declined, on the ground that he had been in Manchester for so short a time.

He was also busy as chairman of the Churches Unity Commission — an ill-starred attempt to bring together the Church of England, the Methodist Church and the United Reformed Church.

In 1978 Robert Runcie, later Archbishop of Canterbury, refused to move from St Albans to Oxford, so he moved south to take over in the university city, spending the next eight years as a respected elder statesman of the church. It was a real contrast to the inner city problems he had wrestled with in Manchester.

His ecumenical and international interests were kept alive by his presidency of the Conference of European Churches, a body of increasing importance as the movement for European political union gained speed.

He also joined the company of bishops critical of many of the policies of Margaret Thatcher's government, and he was an early advocate of the ordination of women.

In 1986 he retired to Edinburgh to live in a flat overlooking the Meadows, and he served as an honorary assistant bishop until his ‘second retirement" in 2000. Up to about a fortnight before his death on July 8 2002 at the age of 81, he was active in and around the diocese.

He married his wife Margaret Menzies Menzies in 1952, and they had two sons, Jock and Andrew. Andrew, as a young man, was killed in a car accident in South Africa, and Margaret died in 1989.