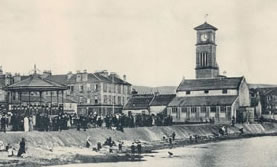 THE old Granary was a picturesque building on Helensburgh seafront. It was originally a malt barn and, for a time, contained an unlicenced room, selling alcohol.

The image on the right was taken around the turn of the century. It is 4pm and there are crowds around the bandstand being entertained. The Old Parish Church clock tower stands behind the Granary buildings.

The Gareloch Motor Service Co. Ltd used the old buildings as a depot, operating a service for public transport to Clynder, Garelochhead and Kilcreggan — with uniformed drivers.

In 1928 another plan to modernise the seafront came into being. The Granary Restaurant aimed to replace the old Granary buildings.

It was an ambitious plan which involved, on the ground floor, three shops, kitchen, lounge and toilets. A magnificent staircase led up to a restaurant, which could accommodate up to 300, a tea room and a balcony overlooking the Clyde.

The Granary opened as a restaurant in 1934 and also catered for wedding parties.

It is not known when it was turned into a bingo hall and amusements arcade, but this was its last transformation before it was demolished in 1981.

It was replaced on the site by a pub called The Old Granary, which after some years was closed and the building was boarded up, and available for purchase for some time.

Then new owners took it on and it become a pub called Clockworx. This was later transformed into Mariners nightclub and was a popular venue for some time until it closed in 2008.

Work began in 2010 to refurbish it and it was two weeks away from completion and re-opening when it was burnt down in April in a blaze in the early hours, and demolished the next day.