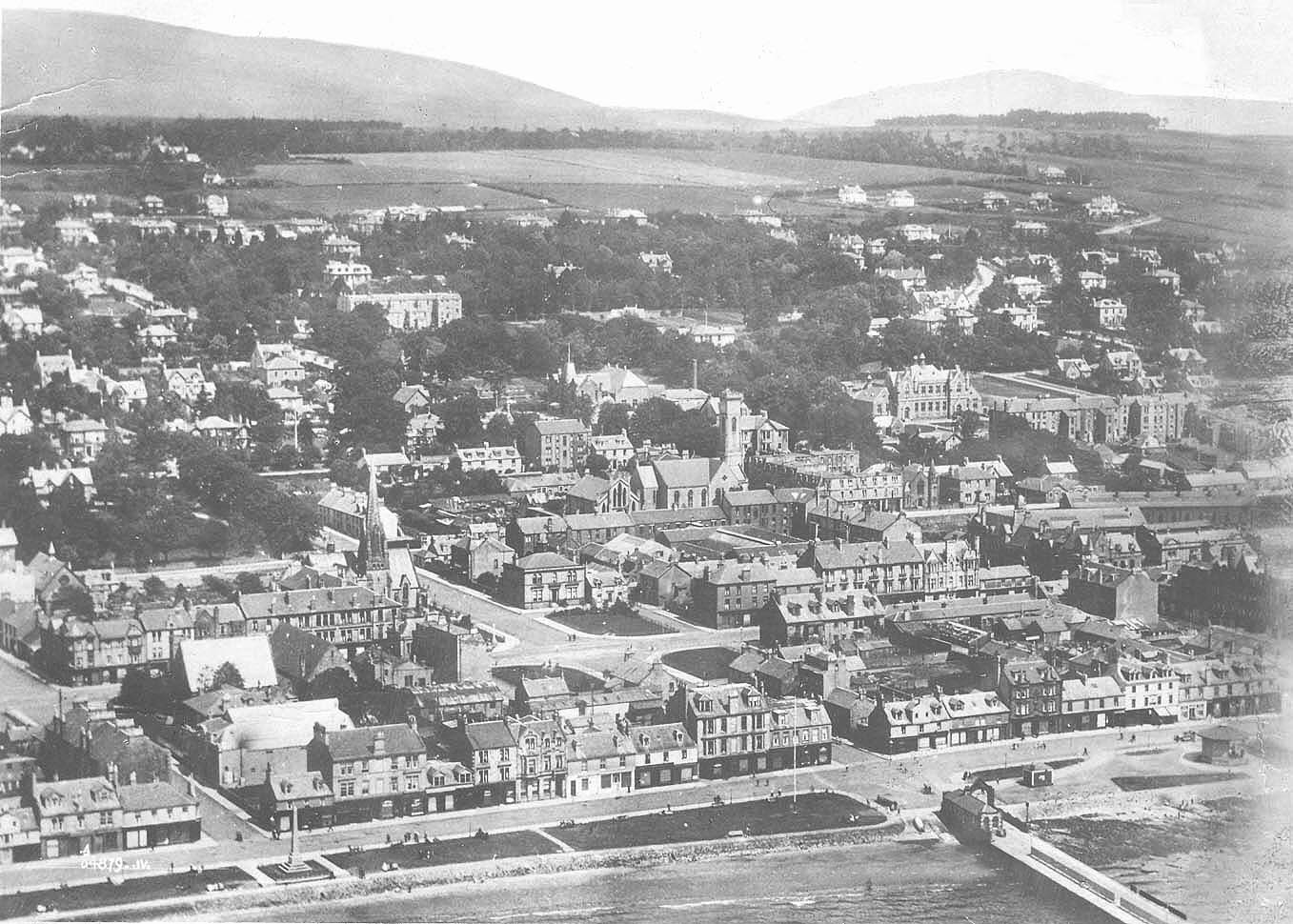 AT FIRST glance, Helensburgh may look much the same now as it always did. But not at second glance!

This became very clear when Ken Bryden, from West Vancouver, British Columbia, Canada, got in touch with Helensburgh Heritage Trust and emailed this aerial picture of the burgh.

Ken, whose grandfather was Walter McEwan Bryden, brother of Provost Sam Bryden, is the nephew of Walter S.Bryden and his wife Doris, and Ian and Jenny McLachlan, all now dead.

His request was — could the Trust give an approximate date for the photograph?

He says: “It's easy to set the basic parameters, but not so straightforward to give an exact date.

“La Scala picture house was opened in December 1913. As the trees are in full leaf, the photo would have to date from at least 1914 — one wonders how many planes were in the skies at that time!

“The other limit is again readily obtained from the other prominent picture house, or rather lack of it, the Tower, which opened in September 1927. So, what other clues are there?

“There is no sign of Hermitage Primary School, which was built in 1926. Again, the seafront putting green, which dates from 1925, may not be in operation, in that there is no sign of the hut normally found in such situations, though one could argue that an argument like this is flimsy.

“Again, the War Memorial in Hermitage Park, with its distinctive dome, dating from 1922, is nowhere in sight, although the trees could well be obscuring the view.

“However there is something else worth commenting on. If you look closely at the roads, you can see marks on the surface at several popular crossing-places, for example across the foot of James Street, across the foot of Colquhoun Street, and across Clyde Street east of the flagstaff.

“Old photographs from the Edwardian era show cobble stones at some popular crossing-places, and the marks could either relate to these, or may simply be the result of beaten tracks across the surface.

“Whatever the case, it looks as though the roads have not been surfaced with tarmac. This innovation was brought in locally in 1923, which, along with the other clues, would make it likely that the photograph dates from 1914-1923.

“If only because of the high quality of the picture, I would tend to go for a later, rather than an earlier, date within this time-frame.

“There are several other features in the photograph which may be worthy of comment. Given that there are quite a few people about, it does seem odd that there is a virtual absence of road transport.

“Also, between the bandstand and the hut, there would appear to be a large pile of some loose material, unless this is due to a blemish in the picture.

“One could speculate that this material may be for road surfacing, or it could even be a large pile of sand — for a number of years from about 1914, there were annual sand-castle building competitions on the seafront, and it might be supposed that top-ups of sand were needed from time to time.”

So he suggests a year closer to 1923 than 1914, but certainly within that period.

The Bryden family were the proprieters of Macneur & Bryden Ltd., who owned a stationers, gifts, toys and sporting goods shop in East Princes Street, a property agency in West Princes Street, and the Helensburgh and Gareloch Times weekly newspaper.

Sam Bryden (pictured right), provost from 1902-8, and his partner James Macneur bought the business around 1875, and it continued until the 1980s.

Further information about the photograph came from local man Ian Broadley, who commented: “It is surely a picture-postcard photograph and possibly taken by Valentine.

“The company was very active in the twenties, which I would suggest was the most likely time for early commercial aerial photography, using World War One technology. Web info warns that Valentine sometimes touched up the detail of pictures to show that it was their unique property.

“I suggest that the absence of vehicles is due to it being the Sabbath morning. So households were brushing up the good suit and getting the mothballs out of the Sunday dress. The clue to this is the shutters on the shop windows.

“The shadow of the sun suggests mid-morning and, as conjecture is free of charge, about one and a half hours after high tide with fairly fresh south-westerlies blowing. The beach is damp and the west side of the pier has breaking waves. The pier is giving a lee to the east side.

“Finally, from a study of the aerial pespective of the picture and an estimate of the height of the West Kirk spire, it would seem that the aircraft was flying at a height of around 400 feet. Now surely such a flypast must have made the local paper!”

Ian says that at least one major mystery remains. “Though the buildings show strong and consistent shadow, where is the shadow for the Henry Bell monument?” he asks.