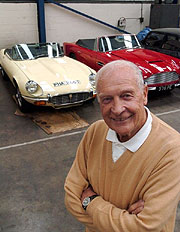 A RHU resident of 23 years was a football star in his day . . . and then became a millionaire businessman.

Malcolm Finlayson, who died on November 26 1914, is considered to be the best goalkeeper Scotland never capped in the 1950s, starring for many years for Wolverhampton Wanderers in front of 50,000 crowds and winning league championships in 1958 and 59, and the F.A. Cup in 1960.

Born in Alexandria, he showed ability at an early age, playing for his school and two different Boys Brigade teams every Saturday.

By the time he was a tall 11 year-old he was playing for under 17 teams. At 15 he played three times as a trialist for Dumbarton and three times in Celtic reserves.

He was spotted playing for Renfrew Juniors by Millwall's Scottish scout, and made his first team debut at 17, keeping his place for four years until National Service in the RAF Police. He played 251 games for the 'Lions'.

Always keen to make money, he used to supplement his meagre salary by selling Hartleys Jam. This did not please his manager, and he was transfer-listed. A move to Charlton seemed likely, but Wolves stepped in to sign the 6ft 1in custodian for £3,000.

“Joining a club with such great players was everything I could ever have dreamed of,” he says. “It was just wonderful. I struck up an immediate rapport with Stan Cullis, who was hard but very fair and an excellent manager.

“I asked him if I could carry on doing my work for Hartleys, and he was delighted. He encouraged players to think of the future.”

In his spare time Malcolm studied book-keeping, statistics and business studies, and he gave up selling jam to become a steel company rep.

Broken bones suffered in a match away to Liverpool at Anfield ended his football career in 1963, after 233 games for Wolves, and he concentrated on a career in the Midlands steel industry. By 1969 he was already a successful businessman, and he diversified into land and commercial buildings.

In 2005 he retired, although he still owned a small property company. He divided his time between his homes in Rhu and Stourbridge, where he kept his collection of priceless classic cars.