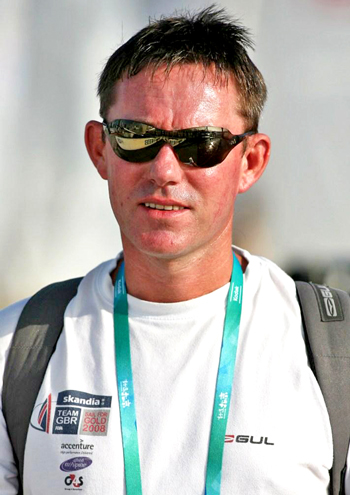 MISSION accomplished . . . that was the verdict of the Helensburgh man who masterminded the success of the Team Great Britain sailing squad at the 2008 Olympic Games at Beijing in China.

Royal Yachting Association Olympic manager Stephen Park, known to his friends as Sparky, set a target for the team of four medals, and they won six — four of them gold. His achievement was recognised when he was awarded the OBE in the 2009 New Year's Honours List.

“We were watching it all on TV, and it was very exciting,” his proud mum Sylvia, of Crawford Drive, said. “But we did not have any contact with him during the sailing at the Games because he was too busy!”

Stephen was born in Glasgow on February 24 1968 although his dad Douglas and his mum lived in Helensburgh. He attended Hermitage Primary School and Hermitage Academy, and learnt his sailing in Mirror dinghies and 420s at Helensburgh Sailing Club — eventually becoming Scottish champion.

He took a BA degree in sport at the Scottish School of Physical Education at Jordanhill, then left home to do an MSc in Recreation Management at Loughborough University, then a postgraduate diploma in management studies at Newcastle Business School.

As a sailor he completed Olympic campaigns in both the 470 and Tornado disciplines for the 1992 and 1996 Games respectively. From 1996, he started working full-time on the RYA Olympic programme supporting John Derbyshire, the past Olympic manager, and overseeing the Olympic development squad.

As a key member of the successful Sydney 2000 Olympic sailing team, he spent much of his time coaching the 49er squad, and Ian Barker and Simon Hiscocks won a silver medal in that class.

In 2004 Stephen led the British Olympic sailing team to the Athens Games, where his sailors won five medals — and he returned home as helm of Britain’s most successful Olympic sport. This won him and the team many awards, including a BBC South Sport manager of the year title.

He continued to manage the Olympic team as they prepared for the Beijing Games, with the primary target of four medals from eleven events.

He described his Beijing squad as the best ever sailing line-up for Britain at an Olympic Games, and said the team’s preparations had been absolute and they were confident of being able to handle the varying and challenging conditions at the coastal resort of Quingdao.

He said just before the Games started: “We’re very confident that we’ve got a fantastic team, and we’ve got a group of sailors who have really left no stone unturned in their quest for success.

“They are prepared physically, technically and mentally, and so that gives us confidence that we should hopefully have a good Games. The four medal target is realistic for us, although the margins between winning a medal and not winning a medal are so small. If we win four, I’ll be very happy.”

He was very happy indeed when his team finished with six medals, and he said that the team's sustained success — this was the third Games in the row that they had topped the sailing medals table — was part of a more general change within British sport.

"It's absolutely fantastic, I'm over the moon with the medals and the gold for the Star class was the icing on the cake," he said after he was thrown into the water by his jubilant team at the end of the regatta.

"It's a huge relief that we've actually managed to deliver against our target. I'm really pleased that Great Britain has had a fantastic Olympic Games and we played our part in that.

As the team significantly overachieved in Quingdao, Stephen said that Britain would go into the 2012 Olympic Regatta at Weymouth absolutely determined to build on their success, and he is now working hard on obtaining the vital sponsorship required.

"The aim is to win in every class, and rest assured we will be going into that regatta with people that we believe are capable of winning in every single discipline," he said.

"We can beat four gold for sure in four years. We could have five or six because we have the talent in the squad. This was the strongest sailing team we have ever had, and we might easily have had a gold in the 49er, and medals in the Tornado and the men's windsurfing.

“There are plenty of people in the wings waiting for their chance, and we think there is more to com 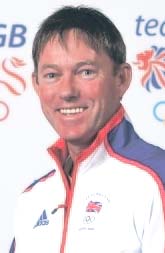 “The country needs to think how we can use home advantage to our benefit within the rules, and not just about making a quick buck. We need to support British athletes across all sport.

"The ballpark figure for us is £2m a year plus sponsorship. We are not sitting back and expecting the public to pay.

“We get the same amount per head as all the other sports in the world-class programme and we top this up with sponsors, while the individual sailors also have their own backers. If we want to keep delivering medals we have got to keep investing in sport."

In December he received the Coach of the Year award in the annual Sunday Mail Scottish Sports Awards 2008 in association with sportscotland. It was presented to him by Scotland football manager George Burley and Brian McColgan of sponsors William Hill.

Stephen, who lives in Titchfield, Hampshire, with his wife Julia and daughter Grace, still enjoys keelboat racing when time permits. Earlier in 2008 he was navigator on board Fair Dos VII, which won the Rolex Commodores’ Cup as part of the Great Britain Red team.

Asked about interests away from sailing, he replied: “Motorsports, mountain biking, skiing and driving along country lanes in my Caterham 7 sports car to find country pubs.”

His brother Ian had a similar education, also learnt at Helensburgh Sailing Club and represented Scotland, and together they won the Scottish Schools Championship representing Hermitage Academy. He is now in the oil business — though he still sails a Mirror dinghy with his children.

Of Helensburgh Sailing Club, Stephen says: “It is one of the best places in the United Kingdom to go sailing.

“It has a great history, a fantastic record of producing sailors who have gone on to represent Great Britain at the Olympics, Round the World races and other top international sailing events, and will always be the sailing club I regard as home.

"If you are looking for somewhere to learn to sail or hone the skills needed for world class sailing competition, you will struggle to find somewhere better than Helensburgh Sailing Club."