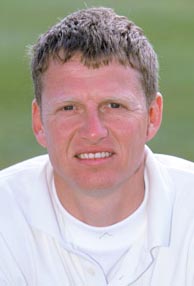 HELENSBURGH was the birthplace of a cricketer who played eleven tests for England and 306 matches in a first class career which lasted 19 years.

Right arm offspin bowler Peter Such took over 1,000 wickets, had a best performance in test matches of six wickets for 67 runs against Australia, and took five wickets in an innings on 49 occasions.

He was born Peter Mark Such at 27 Cumberland Avenue on June 12 1964 to English parents, a Royal Navy Chief Petty Officer based at Faslane and his wife, a midwife.

He said: “My father served in the surface fleet, mainly frigates and destroyers, in the engine room. We lived in Helensburgh for less than a year, before moving to Edinburgh, where we lived for two years.

“After this my father left the navy and qualified as a teacher at Loughborough University before having a 30 year teaching career. Mum and Dad are both retired and live in South Nottinghamshire, as does my older brother who was born at Long Eaton.”

Peter played for Nottinghamshire, Leicestershire and most notably Essex. Coming in off a much longer approach than most of his slow bowling contemporaries, he relied mostly on patience, accuracy and subtle variations in flight and pace, rather than any mystery deliveries, to snare his victims.

It was his accuracy and natural economy, as well as his ability to bowl long spells and tie up an end — he once bowled 44 overs in a row in a day in a county game — that elevated him to international level, and he made his debut during the 1993 Ashes series on June 3, replacing John Emburey.

He made an immediate impact, achieving his best international figures of six for 67 on his debut, and featured in all but one of the tests that summer. He went on to feature in all three tests against New Zealand the following year.

However, he had to wait five years for his next chance at international level against Australia at Adelaide, and only had the opportunity to play a couple more tests after that, losing his place to Robert Croft or Ashley Giles, both also capable batsmen. His final test started on August 5 1999.

Batting was not Peter’s forte, although he does carry the dubious distinction of grinding out what is now the second-longest duck in Test history, clocking in at 72 minutes of stonewalling in what turned out to be his final test innings. His best test score was 14 not out.

He also made two fifties in county cricket, and it was at Essex where he gained most success — although he is perhaps best remembered for hitting the winning boundary on the second day of a Natwest Trophy semi-final against Glamorgan in 1997 when play had been suspended the day before because of bad light, with Mark Ilott and Robert Croft having an on-field confrontation seen on BBC TV.

Peter was the architect of the Essex Cricket Academy which, in its first three years, produced six county cricketers, including opener Alistair Cook who scored a century in his England test debut and is a key member of the current side.

He was also lead tutor on the England and Wales Cricket Board Level IV elite coaching programme and a specialist coach for the England under 17 and 19 squads.

He left the Essex Academy in 2005 to work with a global outsourcing company, but has since turned his attention to applying elite sports coaching skills to business environments.

He has solid experience in business training and individual coaching, which make his blend of skills of great value to any organisation wishing to improve their individual and collective performance

Peter, who now lives on the Essex and Suffolk border, currently works as a learning and development consultant, and looks to highlight the common themes that make up elite performance at team and individual level, both in business and sport.