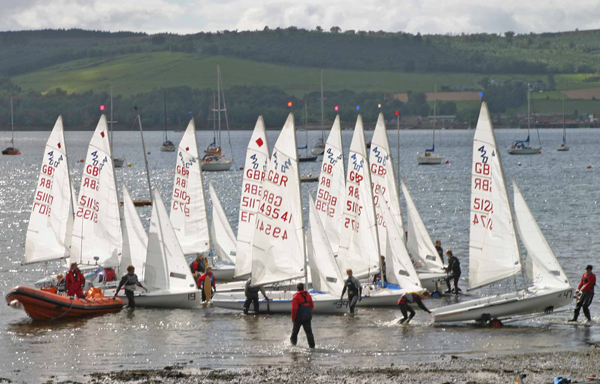 HELENSBURGH Sailing Club was founded in 1951 by a number of local enthusiasts with the aim of encouraging small boat sailing in the waters off Helensburgh.

As a burgee they chose a white pennant with the flywheel of the pioneer paddle steamer Comet represented on it in black. The Comet sometimes sailed from Helensburgh pier where the club was initially based and the flywheel is still displayed at the East Bay.

Initially the members had a heterogeneous collection of craft including several small clinker sailing dinghies, a converted ship’s lifeboat, an ex-R.A.F. airborne lifeboat and a number of small cruising keel boats.

Fortunately relatively cheap plywood sailing dinghies had recently come on the market in kit form and several members co-operated in the construction of these craft in various sheds throughout the town.

Although the club has always offered handicap racing these new dinghies soon led to the development of scratch racing, and by 1959 40 GP14s, 26 Enterprises, and a growing class of Albacores had entered for club events.

Since then classes have changed with Mirrors, 505s, Lasers, etc. appearing on the scene, but the pattern of weekend and midweek handicap and scratch dinghy racing continues to the present day.

Similar provision along with musters and the occasional short passage race has also been made for keel boats and since the 1980s keelboat racing has been a joint venture with the Royal Northern and Clyde Yacht Club organised through the East Patch Committee, on which both clubs are represented.

Regattas have also been a regular feature of, the racing calendar starting with the Coronation Regatta in June 1953. In 1958 the club's main annual regatta was switched to August with the introduction of a two day Small Boat Weekend and this pattern has continued to the present day.

The original base at Helensburgh Pier soon became unsuitable for the rapidly expanding fleet of dinghies which had to be moored in a rather exposed anchorage, and in 1959 a small dinghy park with launching facilities was established at the west end of the town.

Since then facilities have improved with an enlarged dinghy park, improved launching facilities, a car park and the building of a small clubhouse in 1967 that was extended in 1974.

Unfortunately this clubhouse was flooded in 1987 and then again in 1991, and so infill to the seaward side was arranged as a sea defence, raising the dinghy park about 1.5 metres.

In 2008 work on a replacement clubhouse began but built at the same level as the dinghy park. It was completed in June 2009.

The 1967-2008 clubhouse was a flat roofed timber construction and was augmented by two Portakabins. It had become too small, obsolete in design and reached the end of its useful life.

Training has always played an important part in club activities. Initially this consisted of classes in local halls during the winter, followed by practical sail training in members boats in the summer.

In recent years the facilities provided by the clubhouse and dinghy park, and the purchase of a number of club boats, have been used in a major drive to train Juniors, and this is now being expanded to include adults with the club having obtained recognition as a Royal Yachting Association Teaching Establishment.

British Olympic sailing manager Stephen Park OBE, who is just one of many famous names in the sport to have learnt to sail at the Kidston Park club, said of the club: “It is one of the best places in the United Kingdom to go sailing.

“It has a great history, a fantastic record of producing sailors who have gone on to represent Great Britain at the Olympics, Round the World races and other top international sailing events, and will always be the sailing club I regard as home.

"If you are looking for somewhere to learn to sail or hone the skills needed for world class sailing competition, you will struggle to find somewhere better than Helensburgh Sailing Club."

Stephen returned to the town in June 2009 to perform the opening ceremony for the new clubhouse, and was installed as an Honorary Commodore of the club. He was joined by a host of past Commodores of the club, including the other Honorary Commodore, Olympic gold medalist Mike McIntyre.