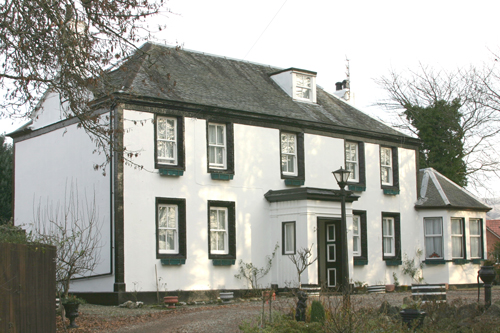 HELENSBURGH’S oldest house is believed to be Drumfork House at Colgrain, said by some to have been built in 1720 and today hidden behind a screen of trees and beside the primary school.

However, according to a local historian, the late George R.Stocks, whose first job after leaving school was working in the then rather more extensive grounds, it was built for John Stevenson, a Glasgow merchant, in 1748.

In an article he wrote for the Helensburgh Advertiser in March 1985, Mr Stocks stressed that authentic details of its entire history are missing, but supplied a lot of information.

The site on which the mansion was built was originally part of the lands of Kirkmichael Stirling, which stretched from the Clyde to the River Fruin. They were first mentioned around 1278, when Malcolm, fifth Earl of Lennox, granted the lands to Sir William Galbraith.

In the next century there were in the possession of the Stirlings of Cadder, and in the 14th and 15th centuries they changed hands regularly. By the mid-16th century Kirkmichael Stirling passed — it is said by a plot — to the rival family Stirling of Keir.

In 1748 John Stevenson, who had married Janet, second daughter of John Dennistoun of Colgrain, feud the site from the Kirkmichael Stirling lands to build the seven bedroom marital home.

Mrs Stevenson lived at Drumfork House until her death around 1808 at the age of 82.

It is not known who inherited and who lived there after her death. It is believed that Major J.D.Brown was the occupant in 1840, and the 1865 Helensburgth Directory shows the occupier as Peter Reid.

In 1884 the tenant was distiller Robert MacFarlane, and various Helensburgh Directories indicate that the house was let to various tenants from then until 1913, and to a naval commander until 1922.

Mr Stocks described the occupant he first knew as something of a character, who wore highland dress and a monocle. He had spent some time on a ranch in America, and was often seen riding in the streets of the burgh in a cowboy outfit.

He was also a radio fan, and he had a whole room given over to a new multi-valve radio set.

By that time its address had changed from June 26 1967 Cemetery Road to 2 Old Luss Road although it was not on the street of that name.

The original Old Luss Road was a drove road used to bring cattle from Loch Lomondside and further north to the Drumfork ferry — near the later Craigendoran Pier — for shipment to Greenock.

Drumfork Ferry House itself was just a cottage which was blown down in the great gale of January 6 1882.

There is an unauthenticated local tradition that Drumfork House was once used as a drovers inn.

Its most famous resident was Colonel George de Cardonnel Elmsall Findlay, VC, MC and Bar, a member of the well known Findlay family of Boturich Castle near Balloch.

He won the Victoria Cross, the highest and most prestigious award for gallantry in the face of the enemy which can be awarded to British and Commonwealth forces, in France during World War One on November 4 1918 for his bravery during a bridge assault.

He died at Drumfork House on June 26 1967 and was buried at Kilmaronock Churchyard between Gartocharn and Drymen. The house then lay empty and boarded up until 1986, when it was bought by Kevan and Kathleen O’Neill.

They painstakingly restored it with advice from the Listed Buildings Authority, and for a time they had registered as a guest house.

Two of Helensburgh’s other very old buildings were both hotels.

The former Baths and Queen’s Hotel in East Clyde Street, home of Helensburgh’s first Provost Henry Bell and now flats, and the Imperial Hotel in West Clyde Street, formerly named the Tontine and also the George, were both in existence when Helensburgh became a burgh in 1802.