A HELENSBURGH man, Archie Renfrew, was one of the survivors of the Lancastria tragedy off the coast of France in 1940, when some 4,000 troops perished.

Now a commemorative medal is to be presented to the families of those involved what was dubbed the worst ever maritime disaster.

Archie — one time manager of the town’s Trustee Savings Bank — volunteered when war broke out and his skills as a banker were employed in the Pay Corps.

He was one of thousands of support troops, many not skilled in the art of combat, who were left behind as British forces beat a hasty retreat from French soil two weeks after the Dunkirk evacuation.

The Troopship HMT Lancastria was carrying around 5,000 men when it was sunk off St Nazaire by German bombers. Around 4,000 died — 400 of them Scots.

Servicemen were forced to wait for smaller craft to transport them to the Lancastria, berthed five miles off the coast, which was to carry them to safety.

But the operation was thwarted when enemy bombers opened fire on another evacuation vessel. They failed to sink her, but returned to score three direct hits on the Lancastria, whose captain had been ordered to carry as many men as possible without regard to safety regulations.

It took just 20 minutes for the 16,243 ton Clyde-built liner, requisitioned from cruise company Cunard, to sink, with the loss of more lives than the combined losses suffered on Titanic and Lusitania.

Archie returned to Britain after the disaster, before seeing out the rest of his service in El Alamein.

He died from a heart condition in the 1950s, aged just 44, without ever seeing the experiences suffered by the men aboard the Lancastria recognised.

Little was revealed of the incident at the time, as Prime Minister Winston Churchill ordered a cover up, fearing damage to wartime morale.

Families of those involved in the disaster have long asked for recognition for the men. They fought a long campaign for the ship’s wreck to be designated as a war grave after divers began making glory trips to the site.

His brother Ian backed the campaign, and he recalled: “Archie was able to escape from the ship and got on to a piece of floating wood to keep him alive. A lot of people drowned on that ship. He was in the water for three hours, but was picked up by a passing destroyer.

“Archie often recalled the horrors of that fateful day. He said there were men all around him singing hymns because they believed death was close.

“A second bomber, following the aircraft that scored the direct hits, continued to fire on men in the water, as well as launching incendiaries in a failed bid to ignite some 14,000 gallons of oil seeping from the stricken liner.”

News of moves to strike a commemorative medal to be presented to families of those involved in the disaster was revealed during a Holyrood debate in December 2007.

The issue was raised by SNP MSP Christine Grahame, who has worked closely with families of those involved through a pressure group, the Lancastria Association of Scotland.

It will be only the second time that such Scottish medals have been issued — only the country’s 129 inaugural MSPs have been handed the honour before.

Ms Grahame said: “This is wonderful news for the families, and I am absolutely delighted that at last there has been official recognition given to those who paid the ultimate sacrifice and to those survivors who endured the horrors of the sinking and the decades of official silence.

“The pressure is now clearly on the British Government to ensure all those who were aboard, regardless of their nationality, are properly and formally recognised.

“This is a significant day for the campaigners and Scottish Ministers have demonstrated real stature in moving to recognise a tragedy which has been ignored and forgotten by successive British Governments.”

Launched on the Clyde in 1920 as the Tyrrhenia for the Anchor Line, a subsidiary of Cunard, the 578 foot liner could carry 2,200 passengers in three classes and was built 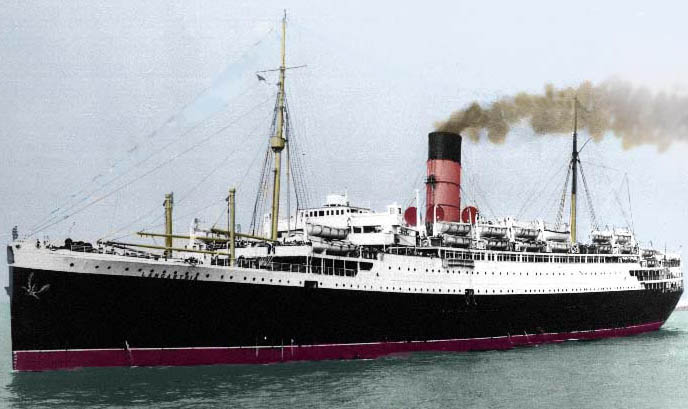 by William Beardmore and Company at Dalmuir. She made her maiden voyage on June 19 1922.

She was refitted for just two classes and renamed Lancastria (pictured right in peacetime) in 1924, after American passengers complained that they could not properly pronounce Tyrrhenia.

She sailed scheduled routes from Liverpool to New York until 1932, and was then used as a cruise ship in the Mediterranean and Northern Europe.

With the outbreak of the Second World War, she carried cargo before being requisitioned in April 1940 as a troopship, becoming the HMT Lancastria. She was first used to assist in the evacuation of troops from Norway.

After a short overhaul, she left Liverpool on June 14 under Captain Rudolf Sharpe, and arrived in the mouth of the Loire river estuary on June 16. By the mid-afternoon of June 17, she had embarked an unknown number (estimates range from 4,000 up to 9,000) of civilian refugees and RAF personnel.

She was bombed at 3.48 p.m. by Junkers 88 aircraft from II.Gruppe/Kampfgeschwader 30. Three direct hits caused the ship to list first to starboard then to port and she rolled over and sank within twenty minutes. Over 1,400 tons of fuel oil leaked into the sea and was set partially ablaze.

Many drowned, were choked by the oil, or were shot by the strafing German aircraft. There were 2,477 survivors. The death toll accounted for roughly a third of the total losses of the British Expeditionary Force in France.

The immense loss of life was such that Churchill banned any public announcements of the disaster through the D-Notice system. The story was broken by the New York Times and the Scotsman newspaper on July 26 and the British press did make brief mention of the story.

Because of the imposition of the D-Notice, survivors and the crews of the ships that had gone to the aid of Lancastria did not discuss the disaster at the time for fear of court martial.

The British Government is refusing to make the site a war grave under the Protection of Military Remains Act 1986 despite Freedom of Information documents proving this could be achieved, although the French Government has placed an exclusion zone around the wreck site.

Rudolf Sharpe survived the sinking and went on to command the Laconia, losing his life along with many Italian POWs on September 12 1942 when the ship was torpedoed off West Africa.

■ A delay caused the former Helensburgh platoon of Dumbarton ‘A’ Company of the 9th Argyll and Sutherland Highlanders to fail to catch the Lancastria. 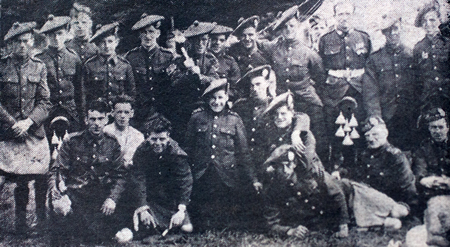 The town platoon was formed in 1926, and many townsmen served in it until 1938 when the 9th Argylls was replaced by the new 54 Light Anti-Aircraft Regiment.

Many of the men transferred to the new regiment and were serving in France at the time of the sinking — they were thankful that this time they missed the boat.