A LUSS man who with 13 other Scots died in 1917 in the world’s worst man-made pre-nuclear explosion in the harbour at Halifax, Nova Scotia, Canada, is remembered every year on December 6.

Second Engineer John MacGibbon, son of villager John MacGibbon and his wife, Jane Bennett, was serving on board the merchant ship SS Curaca, which was loaded with grain and was awaiting a shipment of horses.

At 7.30am on December 6, the French ship SS Mont-Blanc weighed anchor in Halifax harbour packed with a lethal combination of 2,300 tonnes of wet and dry picric acid, 200 tonnes of TNT, 300 rounds of ammunition, 10 tonnes of gun cotton, and 35 tons of benzol.

At the same time the Norwegian vessel SS Imo set off bound for New York to take relief supplies to Belgium. But a series of flawed manoeuvres resulted in the Imo striking the Mont-Blanc on the bow.

It was not severe collision, but a fire immediately broke out on the French ship. Everyone on board fled, leaving the ship to drift into one of the piers where it burned for 20 minutes, attracting many spectators. Nine firefighters were killed in their desperate bid to extinguish the flames.

But just before 9.05am local time, as the tug Stella Maris tried to tow her out to sea, the Mont-Blanc exploded. Clocks frozen at the time of the blast, including Halifax City Hall’s main clock, remain to this day a memorial to a devastating tragedy which left more than 2,000 — including 64 Britons — dead and 9,000 wounded.

The initial shockwave across two square miles from the north end of the city killed many instantly, including school children who had stopped to watch burning ship.

A barrel of one of the ship’s cannons landed over three miles away, windows shattered 50 miles away, and the shockwave was felt as far away as 270 miles.

Seawater was vaporised and pushed into a tsunami which lifted some ships inland. Fire then ripped through the city and finished what the explosions started. The next day a storm left 16 inches of 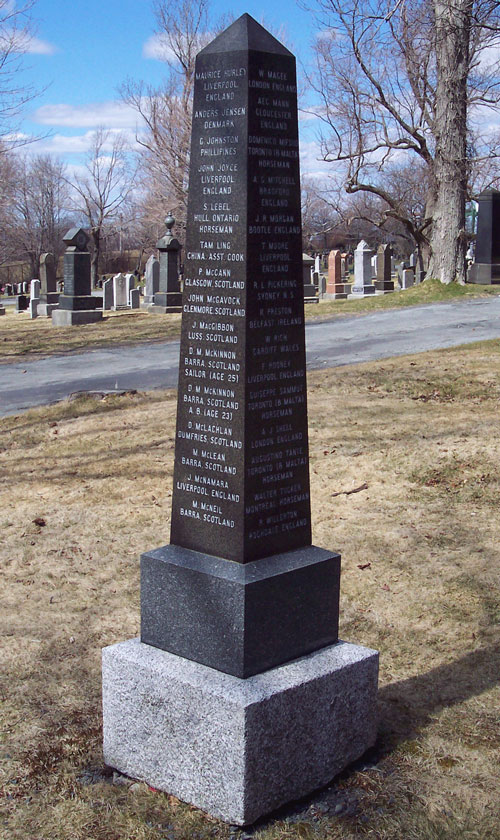 One little girl survived for 26 hours trapped under a stove ash pan — and she is one of a few dozen survivors still living today, 90 years on.

Second Officer MacGibbon, who was 30, was one of 14 Scots, including five from Barra, on board the 6,386-ton Sunderland-built Curaca, which had arrived from Saint John, New Brunswick, and was tied up at Pier 8, having loaded with grain and awaiting a shipment of horses.

The explosion blew it across the harbour where it ran aground and partially sank in Tufts Cove, Dartmouth, (pictured above) and in all 45 men on the ship, mostly British, lost their lives. Only one man on board survived, and at the time seven or eight were ashore.

Their origins were only recently added to a formal monument in Halifax after researchers on both sides of the Atlantic helped piece together missing records.

A stone was originally erected in memory of those aboard the ship but there were no names on it. But in 2002 Bill Fairbrother, a grandson of one of the crew members, came across a reference to the ship in an article.

He travelled to Canada and was put in touch with Janet Kitz, an author and historian originally from Carnwarth in Lanarkshire, who has dedicated nearly 30 years to researching the explosion.

Between the two, they managed to research the names and occupations of those on board and have them inscribed on the stone (pictured above left). They also arranged a memorial for family members of five crewmen from the island of Barra.

Janet, now 88, said: “At the time there was very little counselling or psychological help of any sort given. People were just expected to get on with it.

“Those people succeeded in their lives, and that message of recovery from the terrible things that happened, of having the courage to get on with it, that’s what strikes me particularly about the survivors.

“Dangerous cargo is still going through harbours today. More people should take notice of the story of the explosion. The lessons at the time were enormous. The aftermath was a first for global outpouring of aid, including from Scotland.”

The explosion was front page news all over the world, and donations came from as far away as China and New Zealand. The British Government sent millions in aid. Even today Halifax still sends a giant Christmas tree to Boston, Massachusetts, in gratitude for that city’s help.

In only the first seven weeks, 3,000 houses were repaired, and within months more than 300 new homes were being built.

The inscription on the memorial stone reads: “Erected by the New York and Pacific Steamship Co., owners of the SS Curaca of London, in memory of the officers, engineers and crew who lost their lives on board that vessel during the explosion at Halifax Dec 6 1917.”

The London-registered 403 feet long Curaca, built in 1912, was later raised, repaired, and put back into service under the same name.

She was transferred to Panamanian registry in 1922 but had the same owners until 1931 when she was sold to the Curaca Shipping Corporation, the Argonaut SS Line, in Panama. In 1934 she was scrapped at Osaka, Japan.

Second officer MacGibbon was one of five children of the Luss couple, who lived at Elmbank in the village and are buried in Luss Churchyard where there is a family memorial (pictured right).

Their first child, also John, was born on May 7 1885 but died on November 16 1887. Poignantly they gave the same name to their second son, born born five days earlier. His name is also included on the war memorial in the village.