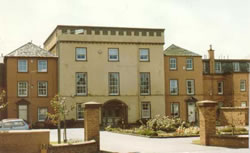 THE Bells and Helensburgh are inextricably linked with the history of the other.

Margaret Bell, wife of Henry Bell, owner of the 'Comet' and Helensburgh’s first Provost, was a Seceeder who travelled to Dumbarton to worship. Later she opened her home, the Bath’s Hotel, for Sunday worship, arranging for a minister to come and preach there.

When the adherents increased they moved to the Old Courthouse building in Sinclair Street, on the site of the present Municipal Buildings. The Bible presented by the Rev. Hugh Somerville on March 27 1844, the day they became a congregation, is now in the Helensburgh Library

Margaret Bell was a founder-member of the Seceeder’s Church in Helensburgh, the 'Wee Church', and a gallery was added in 1851 for the growing congregation. This church was the predecessor of the adjoining 1861 building, now named the United Presbyterian Church of St Columba. The 'Wee Kirk' is now used as the church hall.

Mrs Bell was considered 'a country belle' in her youth, and was said to have kept her beauty into old age. She was extremely proud of her husband and very annoyed because she felt that he had not had the recognition he deserved for the contribution he had made to steam navigation.

“In 1794 he [Henry Bell] took unto himself Margaret Young to wife, undoubtedly one of the best things that ever happened to him, for she was woman of character who supplied just what was lacking in him — business faculty and application.”

The Bells were well-known in their day. Harriet Beecher Stowe, author of 'Uncle Tom's Cabin', called on Margaret Bell in April 1855.

The Helensburgh and Gareloch Times noted that the writer was “presented with two engravings of the 'Comet', the first European steamer, by Mrs Bell, the venerable hostess of the Baths, towards whom she evinced particular attachment.”

Another distinguished visitor was Jane Welch Carlyle, diarist and wife of the philosopher Thomas Carlyle, who called on Mrs Bell in 1853.

Margaret Bell died on April 30 1856, aged 85, and she is buried in Rhu Churchyard with her husband.

She did not forget the poor and needy of the town. She left money to several good causes, including a fund for members of her church who had fallen on hard times:this fund still exists.

Reproduced with the author's permission from the St Columba Church website.

Further insight into Mrs Bell was found by Trust director Alistair McIntyre in an article by James Barr in the Lennox Herald in 1892.

He described meeting her when he was about 16 in the summer of 1831 at the Baths Hotel, which she had been managing alone since Henry Bell's death in November the previous year.

Barr writes: “On entering, we found her to be a quiet, unpretending little woman, modestly attired in black. She recognised James [Harper, his employer] at once, and the cordiality of her greeting was to me sufficient proof that she and her husband had really been intimate friends.

“Before we left, she showed us models of different kinds which he had made from time to time, and the saddened expression on her face when referring to him proved that the bereavement had been deeply felt.”