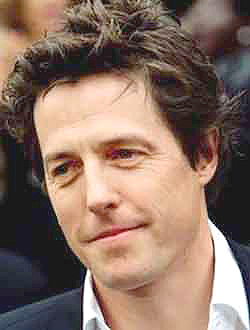 The Hollywood superstar, who plays an archetypal English gentleman in many of his films, visited Helensburgh and Cove in August 2007 with his father on a trip to rediscover the family roots.

The impressive Linn Villa in Cove once belonged to his ancestors, the wealthy Martin family. His great-grandfather, William Martin, leased land from the Duke of Argyll in 1860, and built the villa.

Hugh’s grandmother, Jessie Martin, grew up at the house, and his father, James Grant, spent his teenage years there while his own father, Major James Murray Grant, was fighting during World War Two. Major Grant, who was second in command of the Seaforth Highlanders, was decorated for bravery at Dunkirk.

Dr James Taggart, of Linn Villa and Gardens, told Helensburgh Advertiser reporter Rachel Lamb: “I met them out in the garden with a few old photographs. I talked mainly to his father — as a child in the 1940s he lived in this house.

“He wanted to see the place again because it belonged to his family and he stayed here during the Second World War. He said that it has not changed very much.

“We sat outside chatting about our wartime experiences. He remembers seeing a ship being sunk in the Firth of Clyde from a window in this house. I remember watching Greenock burn from my room in Helensburgh.”

Dr Taggart only realised that the younger of his guests was the star of Four Weddings and a Funeral when his daughter recognised him.

The name Linn relates to the swampy ground below the cliff once flooded by the Meikle and Bogle Burns. In 1860 William Martin leased the land from the Duke of Argyll and built the villa in the style of Alexander ‘Greek’ Thomson. The architect was William Motherwell. The early garden was constructed on the ground around the house.

In 1971 Dr Taggart moved to Linn Villa (pictured left, from the Linn Gardens website) and redeveloped the garden extensively, expanding it into the gully of the Meikle Burn, and making it of special botanical interest.

The garden was redeveloped from the Victorian layout of lawn, hedges, tennis court, and a formal kitchen garden. The lower part of the garden was a field, including the part where the house Linn Field, a large wooden bungalow, now stands as a seperate property, and it was ploughed for potatoes during World War Two.

His grandson Peter recalls: "Before 1971 there was one herbaceous border, a large kitchen garden, several hen runs, a tennis court, the burn was a rubbish dump with no paths.

"Some apple trees, several rowans, native oaks and ash, a couple of lawson cypress, a copper beach, and a laburnocystis, a Griselinea, and half a douzen victorian Rhododendron hybrids, and a lot of Rhododendron ponticum hedges  were as interesting as it got.

"The initial collection of plants was moved to the Linn with us in 1971. Some of those plants were my grandmother's and may well be 80 years-old now. The move to the Linn took one pantechnicon of furniture and two of plants in addition to innumerable extra trips."

Peter's brother, James, has now taken over the development of the garden, which is open daily from 11 a.m. until 5 p.m.

Among its attractions today are exotic rhodendrons, the bamboo garden, the old cultivated area of the garden, the terrace with its splendid vista of loch and hills, a spikey bed and a lily bed, and the cliff path down to the bottom garden and ponds which have a gravity fed fountain.

Hugh John Mungo Grant was born in Hammersmith, London, on September 9 1960 to Fynvola Susan MacLean, a teacher, and James Murray Grant, an aspiring artist and carpet salesman who ran a carpet firm.

He has an older brother, James, who is a banker. Their mother died of cancer, and since then Hugh has been a major supporter of Marie Curie Cancer Care.

His Scottish great-great-grandfather, Dr James Stewart, was an assistant to explorer David Livingstone and he is also related to William Drummond, 4th Viscount Strathallan.

Hugh attended Wetherby School, Latymer Upper School, and — on a scholarship — New College, Oxford, where he studied English and was a member of the Piers Gaveston Society, a notorious dining club. As a child, he was taught the piano by Andrew Lloyd Webber's mother.

He made his film debut, as "Hughie Grant", in 1982 with the Oxford-financed Privileged. Television roles came later. He played a leading role in the Merchant-Ivory film Maurice in 1987 for which he won the Best Actor at the Venice Film Festival.

He then appeared in the 1988 Ken Russell film The Lair of the White Worm, and in 1991, he starred in the film Impromptu as Frédéric Chopin opposite Judy Davis (as George Sand) and Julian Sands (as Franz Liszt).

He also played a major role in The Remains of the Day (1993) and simultaneously became known as the partner of model and actress Elizabeth Hurley, whom he had been dating since at least 1987. However, it was Four Weddings and a Funeral in 1994 which turned him into a major star and gave him a BAFTA and a Golden Globe.