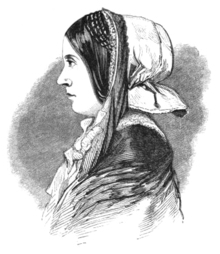 NEW material became available about the Rhu-based mystery of whether or not Madeleine Smith murdered her lover in 2007 as the 150th anniversary of the start of her trial was marked with an exhibition, a re-enactment, and a new book.

Madeleine was tried for the murder of her lover, Pierre Emile L’Angelier, at the High Court in Edinburgh. The trial began on June 30 1857, and ended with a not proven verdict on July 9.

The exhibition and re-enactment were the work of the Faculty of Advocates in Scotland, and Faculty Library staff member Sharron Wilson said: “The Faculty finds this case very interesting for many reasons.

“Two main reasons are, I think, most important. The first is the powerful defence that John Inglis offered Madeleine Smith — the speeches he gave from the case are very well known.

“Secondly, the fact that the outcome or verdict was not proven causes great interest in this case. There is great debate over whether Madeleine Smith was guilty or not.”

Says Sharron: “A special script was penned and offers a summary of the key dates and information from the case itself. The actress who played Madeleine Smith spoke about the case, which is one thing that she did not do in the original trial.

“The material in our exhibition was drawn from Advocates Library Stock and includesd Special Verbatim Reports published in 1857.

“We also have some court paper material including the Indictment of Madeleine Smith, copies of Pierre Emile L’Angelier’s death certificate, and the medical reports produced after his body was found. We were very kindly allowed to display the hand-written notebooks of Lord Handyside and John Inglis.

“The Faculty of Advocates has a vast collection of art work and portraits, and we usied small reprints of the Dean of Faculty John Inglis and Lord Advocate Moncrieff. We visited the Mitchell Library in Glasgow and obtained copies of two photographs: one of Madeleine Smith and one of Pierre Emile L’Angelier.

“We were donated some personal material belonging to members of the Faculty of Advocates, including dedicated scrap books and collections of newspaper clippings covering the trial itself and also brief articles speculating on what happened to Madeleine Smith after the trial.” 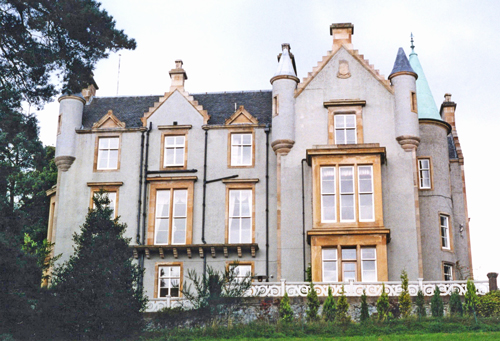 The new book was entitled ‘A Scottish Murder — Re-writing the Madeleine Smith Story’, published by Tempus Publishing. They also helped the Faculty with some photographic material and a copy of the book.

The author of the book, which is accompanied by an interactive website, is Jimmy Powdrell Campbell.

“I got an email from the publisher asking me if I’d like to write the book,” he says, “as they had found the website. I had already scripted a semi-dramatised narrative for BBC Radio Scotland , ‘A Most Curious Murder’, broadcast around 1997, and I am working on a screenplay, with three scenes in Rhu.

“Over the past ten years, three generations of Madeleine’s descendants have stayed with us and we always made a point of taking them to Rhu.”

The Smith family’s summer residence was Rowaleyn, now Invergare, at the top of Glenarn Road (left).

It was designed by her father James, a distinguished Glasgow architect. Much of Madeleine’s romance was conducted there in secret, and that was where the couple first made love.

Jimmy believes that Madeleine did not murder L’Angelier, and his publishers claim that the book forensically makes her innocence clear.