BORN Susan McGlone in 1847, Susie, or Suzy, as her name was sometimes spelled, was a well-known character, not only at Portincaple, where she lived for many years until her death, but also much further afield as well.

Susie's personality alone would probably have been enough to make her a local celebrity, but the extra factor that ensured her a place in the hall of fame lay in the fact that home was an upturned boat.

To be more precise, it was the upturned half-hull of a disused fishing-smack, which according to the late Mrs Work, had once belonged to the McNab family, themselves well-known fishermen and ferry-masters at Portincaple. It was this boat that came to be known as the "castle".

It would appear to have been around 1877 that Susie and her husband, James Reid, set up their unconventional home. "Jamie of the Rhu", as he was often known, was a native of "Wee Doo Hill", in Glasgow's Gallowgate.

Although it is almost always Susie who is thought of in relation to the "Castle", Jamie was also a real character in his own right. As a young man, he would set off on foot for places as far afield as Newcastle and Sheffield.

Making a living at Portincaple from fishing, he gained the nickname of "Jamie of the Rhu" owing to the "Castle" being set on a point ("Rhu", in Gaelic). This point marked the Portincaple end of the ferry that once plied from there to Mark, on the other side of Loch Long.

There are many stories — not always true — about Susie, of which quite a few are first-hand accounts, and there are also many photographs. As her fame grew, people would come and visit her, when she would sell them eggs, knitted wear, and other commodities.

One of the main reasons for there being so many pictures of Susie and her home in circulation stems from the fact that you could purchase from her a ready-made postcard, showing her at the front door. Again, for those with cameras, it was an opportunity not to be missed.

Perhaps curiously, there seem to be few, if any, pictures which feature Susie and her husband together, although there is at least one rare photograph (below) circa 1910 showing Jamie with several visitors, understood by local historian Bob McGregor to be a riveter, his mate, and their apprentice or 'nipper'.

It may be that Jamie was camera-shy, or perhaps more likely, it was simply that Susie herself was perceived as the real star. People often become famous only after their death, but in the case of Susie, even as far back as 1908, she was being featured in the local press.

Certainly, husband and wife seem to have inseparable until his death from dropsy — probably fluid on the lung — in 1918, and a good many of the recorded stories feature both of them.

In Jamie's obituary which appeared in the Helensburgh and Gareloch Times of December 4 1918, reference is made to the "jovial nights" with wife Susie. This perhaps hints at the fact that they both liked a good dram, and there are various tales based on this theme.

The well-known book, "Tea at Miss Cranston's", contains a passage relating to Susie. It should be explained that the body of the book is formed around the reminiscences of Glasgow citizens from about 1890 onwards.

In this extract, we are told that "we used to scramble along the shore to visit an upturned boat that was made into a home, a proper wee dwelling-house. The locals used to call it Susie's Castle, and Susie lived there with her man.

“It was an old Para Handy kind of coal-boat that used to sail the Clyde, and they lived there, these two, like Pegotty, summer and winter,with their wee bit garden round them, and a path running up behind it to the Garelochhead road."

It has to be remembered that the narrators of this episode were youngsters at the time, and had a natural timidity which most adults would have lacked.

The narrative continues: "If we hadn't been afraid to go near, maybe we'd have been able to see the inside. But it was enough to go and look at them from a safe distance . . . at the boat with its tin chimney, and wee bits of curtains at the port-hole windows, and see them sitting outside and chatting and quarrelling all the time, Susie smoking her short clay pipe ("cutty cleys , they used to call them)."

It may be that the stones which the young visitors had heard about Susie and her husband were responsible for their caution: "I mind the local folk used to tell us that they took a terrible amount of drink, the two of them, and when they came back from the pub, taking the width of the road, they'd just stop at the top of the path, lie down, and roll home to the bottom."

As can be imagined, this kind of story would lose nothing in the telling!

Another point which comes from the same narrative in the book is that on the opposite side of Loch Long, at Mark Cottage, there lived a man who was almost as famous at that time as Susie.

His name was James Grieve, reputedly born on New Year’s Day, January 1800, who was billed as the oldest man in Scotland for a number of years until his death in 1910. Visitors with access to a boat could thus make a day of it, calling on both Susie and James Grieve.

Another account comes from the pen of William Hamilton, in his unpublished manuscript, "Memories of a country Boy". Born at Garelochhead in 1889, Hamilton grew up in the village, and his account shows him to be an accurate and perceptive observer of life around him.

In the following passage, he is describing events at the New Year's Day sports, once a regular feature in local life, and here he is probably writing about a time in the first decade of the 20th century.

Mentioning that almost everyone in the village would turn out for the Games, he goes on: "One person, however, saw little or nothing of the Games. She was sitting on a stool at the entrance to the field, and selling Spanish oranges presented to her by the Games Committee as a gift.

“She was Susie Reid, one of the characters of our village . . . almost every day, except Sunday, Susie came over the hill, carrying a basket, in which there would be fish, or something else she could sell.

“Susie knew everybody, and everybody knew Susie. She talked t 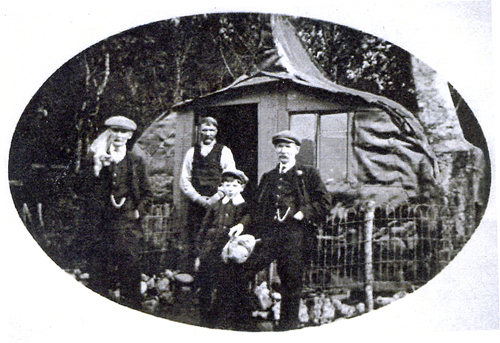 o everybody and anybody, and was obviously an intelligent person, but had two vices; she liked a dram, and she smoked. She was a kindly person, and so far as I know, never said an unkind word to anyone.

"It was on her way home that I saw most of her. By then, she would have had a few drinks and odds and ends in her basket.

"It was not easy to tell her age, but her legs were obviously feeling the strain, and her first halt was at the forester's bridge, a few hundred yards beyond the smiddy. There she would rest on the stone parapet, puffing away at her clay pipe.

“Then on again for a bit, and another smoke, and I have no doubt that eventually she reached Katie Munro's pub at Whistlefield. Bear in mind that in those days, one could get a half of whisky for two and a half-pence. Thus fortified, she toddled on, downhill now, to her home. Picture postcards of Susie and the upturned boat were best-sellers to visitors."

In addition to postcards originating from photographs taken by professionals, and snapshots taken by visitors, local historian Pat Drayton refers to a number of studies of Susie rendered by well-known artist James Kay, who lived at Portincaple for many years.

Pat Drayton, writing in the Lennox Herald of April 3 1992, also refers to a number of anecdotes about Susie, prompted by an article by her which had previously appeared in a magazine.

One lady wrote to tell of how Susie would row from her home to Arddarroch, a distance of some one and a half miles, in order to sell fish to the correspondent's mother.

The same letter praised Susie as a very happy person, full of wit. It seems that students would come to the Anchor Inn at Garelochhead in the summer, when they would ply Susie with drink, prompting her to entertain them with song and dance.

The good nature of Susie is a recurring theme. Again quoting from Pat Drayton, the story is told of how Susie and her husband were often to be found sitting by the roadside at dusk in summer, as they slowly made their way home after an evening of conviviality at the Anchor Inn in Garelochhead.

“There they would wish passers-by a pleasant ‘good evening', and were evidently in no hurry to reach home.”

Despite the stories of her fondness for strong drink, many writers comment on the neatness of the "Castle", both externally and internally.

An article which appeared in the Helensburgh and Gareloch Times in 1922, marking Susie's 75th birthday, referred to the heavy tarpaulins covering the upturned boat, and the ivy-clad brick chimney to one side, with a rowan tree beside. It goes on to mention the colourful display of nasturtiums, sweet peas and honeysuckle to be found by the front door.

The article continues: "Inside, everything was very neat, clean and orderly. china was laid out deftly on a sideboard, while the ingleneuk was full of contented cats. There was an old-fashioned bed at the neb’ end." 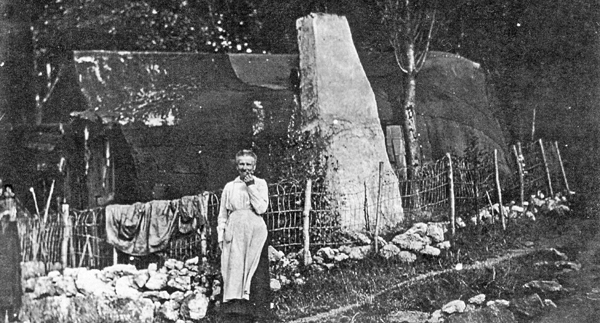 More than likely the term "Castle" owed its origins, in part at least, to the care which was obviously bestowed on what might appear as the most humble of homes.

The 1922 newspaper article also comments, as others have done, that Susie was a very keen reader. Susie obviously had a gifted touch in enthralling people with her stories, laced as they were with good humour.

One favourite tale was of the time she and husband Jamie netted a shark while out fishing, and their ensuing struggles to deal with the large catch.

In the 1922 newspaper article, she is quoted as saying in her pawky manner: "Onybuddy looking at me frae the back wad think me a young bit lassie, but when they see ma face, they'll say, "Ach, she's jist an auld wumman!"

The same article notes that Susie wore widow's tweeds for a number of years after the death of her husband, but now reserved them only for the annual religious service at the "Port".

This latter was a reference to the open-air church service that was once held on Glasgow Fair Sunday at Ferry House, also known as Portincaple House, the home of the McNab family. In fine weather, the service would be held on the front lawn, but with rain, the service would take place within the house.

Several accounts refer to this as Susie's "Red Letter Day", when she would dress herself with scrupulous care.

One of the fascinating things about Susie is that with so many photographs of her in existence, the observer can clearly track her progression into old age. The top photograph is circa 1910, while the photograph at the bottom of the page shows her enjoying her pipe in 1921.

As the obituary in the Helensburgh and Gareloch Times of January 23 1929 reported, she did not go out much in her latter years, but read, smoked, looked after her cats, and knitted. She died at the home of her nephew, John McGlone, at Glen Mallon, having reached the ripe old age of 81 years.