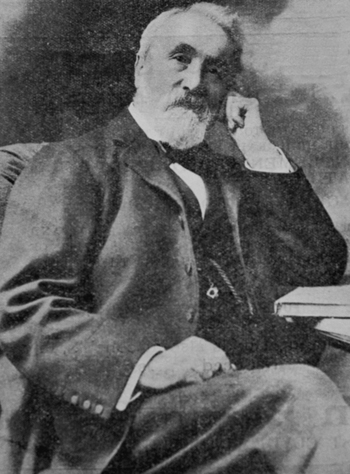 THE teacher at the so-called Helensburgh Ragged School from its origins in 1851 until its demise in the wake of the Education (Scotland) Act of 1872 was George Mair.

Shortly afterwards, however, with the school now under State control and re-designated Grant Street Public School, George Mair continued as headmaster until his retirement in 1898. So he served as head of a Helensburgh school for 47 years — a remarkable achievement by any reckoning.

The obituary notice in the Helensburgh and Gareloch Times of February 2 1916 is undoubtedly one of the longest that ever appeared in the 100 year history of the newspaper, and demonstrates the unique place which Mr Mair had earned in the hearts and minds of townspeople over this long period of time.

Ample tribute to George Mair's qualities may be found elsewhere as well. In "The Story of Helensburgh" (c.1894) we are told: "Mr Mair is not only a well-known townsman, but no one has more worthily earned the respect of the community". The book "Annals of Garelochside", by W.C.Maughan (1896) states: "Mr Mair, happily, is still spared in the post he has so long and faithfully filled".

Mr Mair, a native of Ayrshire, came to Helensburgh in 1851. There had been a growing recognition in the town for the need to make some kind of educational provision for the children of the poorest residents, unable, or unwilling to pay school fees.

Accordingly, after a campaign to establish a school through private subscription, the institution known as Helensburgh Ragged School was set up in 1851, in an attic of the old Town Hall, and Mair was appointed teacher. To begin with, there were 39 boys and girls.

We are told that "Mr Mair entered upon his work with enthusiasm, zeal, and the great moral purpose of elevating by the force of his influence and character, those put under his care".

Numbers of pupils attending soon increased, and within the next year or so, it was decided that a purpose-built school should be provided. A government loan was obtained, and in 1853-54, Helensburgh Ragged and Industrial School, with George Mair as Head, was opened at 11 Grant Street, at the junction of Grant Street and East Princes Street.

Ongoing growth meant that there was a female department, with teacher, and there was also a teacher for the infant class. A map of 1861 shows an L-shaped building, extending well into East Princes Street. Over the years, the school continued to expand, and numbers increased to around 400 children.

Conditions in a school like this must have been challenging, and indeed a flavour of conditions may be gleaned from Minute Books of the Management Committee, and Teachers' Annual Reports.

The circumstances of the parents meant that turnover was rapid, and for some children, their school education was very brief. Lack of funds could also come into play, and music classes, for example, had to be terminated.

George Mair, however, had the character to meet the various challenges, and remained at the school throughout, save for one period of several years, when he taught at the ‘normal school’ in Glasgow. During this time, his place at Grant Street was taken by the Rev Dr Thomas Somerville of Blackfriars Church.

At least as far back as 1865, George Mair had been honoured with Fellowship of the Educational Institute of Scotland. His contributions to the educational process must have been significant to gain this award.

After the changes brought about by the passing of the 1872 Education Act, George Mair was appointed head of Grant Street Public School, occupying the same premises as the previous Ragged School.

A directory of 1882 informs us that in addition to Mr Mair, there were James Dunn and Miss Buchanan as assistant teachers, while Miss Brash was in charge of the infant class.

By the time of his retirement in 1898, it is reckoned that no fewer than 4644 pupils had passed through Mr Mair's school. In addition, and quite remarkably, he had conducted an evening class single-handedly over 21 years, when a total of 1,350 pupils — or ‘scholars’, as they were then termed — received tuition.

The writer of the obituary commented: "It would be difficult to estimate the strong influence for good exercised by Mr Mair on the youth of the town. His pupils, now in every walk of life, and scattered over the whole World, have risen up to do him honour."

Public recognition of his work and worth were made after his retirement, in the form of a presentation, at which he received an illuminated address, and a purse of sovereigns. Mrs Mair received a silver tea and coffee service.

George Mair found time for much religious and philanthropic work. An active member of St Columba Church for 65 years, he was an elder for 53 years, and Session Clerk over a long period of time. In addition, he conducted, with much success, a Bible class. His favourite pastimes were bowling and curling, and there was no more popular member of either club.

The obituary mentions that he was deeply interested in the growth and prosperity of the town, but his quiet unostentatious manner had prevented him from taking an active part in public life. Outwith the town, he was a member of the General Council of Glasgow University.

A large picture appeared along with the obituary notice. This portrays a distinguished looking man, yet his expression has an air of geniality about it, and one can detect that there is perhaps also a sense of humour to be found in the eyes.

Mrs Mair pre-deceased her husband by three years. He had a family of three daughters and two sons, of whom two were alive at the time of his death, Thomas Mair and Mrs Duguid.

Mr Mair lived for most of his time in Helensburgh at Galloway Cottage in Colquhoun Street. When he died early in 1916 at the age of 86 years and was buried in Helensburgh Cemetery, flags on public buildings and schools were flown at half-mast.