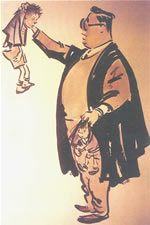 ONE work of art which was not on show in Helensburgh Heritage Trust's 2007 Gregor Ian Smith Exhibition at Helensburgh Library was a watercolour caricature of the late John B.Widdowson during his time as the last headmaster of Larchfield Boys Prepatory School in Colquhoun Street.

The reason, his son Andrew says, is that no-one knows the fate of the caricature, which was completed about 1970 by the artist when he was art master at the school which was later merged with St Bride's School for Girls to form Lomond School.

“Gregor Ian taught me art at Larchfield,” says Andrew, now a teacher himself. “He gave it to the school and it was lost, apparently, in the formation of Lomond.

“All we have is a photo of it taken by another teacher, distinguished English master Nick Aldridge, who directed many wonderful plays. So it is 'missing', and information on its whereabouts would be appreciated.”

Andrew's father was a very popular head from 1966-76, and during that time also compiled the weekly crossword for the Helensburgh Advertiser. The caricature hung in the corridor between the headmaster's study and secretary May Burt's office.

Gregor Ian taught at Larchfield for many years up to about 1972 when he retired and was succeeded by Mary Duncan.

Andrew said: “He definitely gave it to the school — not to my Dad. I suspect someone threw it and other Larchfield archives into a skip at some time before that building ceased to be used as Lomond's middle school.”

He pays occasional brief visits back to Helensburgh from Felsted School near Chelmsford in Essex, an historic independent co-educational day and boarding school founded in 1564, where he teaches maths. He is also director of the Felsted Arts Festival.

His elder brother Ian, who had a holiday job at the Helensburgh Advertiser for a time, owns the Beaver Travel chain of travel agencies in the Forres, Elgin and Dundee areas.