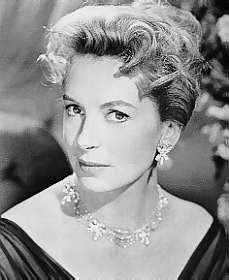 HELENSBURGH film star Deborah Kerr, CBE, who died on Tuesday October 16 2007 at the age of 86, was born Deborah Jane Trimmer on September 30 1921 at 7.40 a.m. to Arthur Charles ('Jack') Trimmer, a civil engineer, and his wife Kathleen Rose, nee Smale.

The couple, who married in Lydney, Gloucester, on August 21 1919, lived in West King Street, Helensburgh.

Deborah displayed a penchant for dramatics at a very early age when she would stage presentations for her family.

Her co-star in these productions was usually her baby brother, Teddy, whom she costumed in dresses. In school, she was active in singing, dancing, painting and piano.

Deborah's father died when she was 15, and she entered the Hicks-Smale Drama School in Bristol, run by her aunt, Phyllis Smale, where she took lessons in acting, ballet and singing. Teddy also took lessons as well.

She won a scholarship to the Sadler's Wells Ballet School, and her first stage appearance in London was in the corps-de-ballet in 1938.

Although Deborah first concentrated heavily in ballet, she soon realised that her height (5'6") put her at odds with the other dancers and she soon abandoned any serious thoughts of dancing professionally. She began to focus on acting and her first acting roles were in Shakespearian plays at the Open Air Theatre in Regents Park.

At one of these performances, Robert Atkins, a film director, and John Gliddon, a talent scout, were impressed with Deborah's elegance, beauty and acting abilities. They offered her a five year film contract which she signed on November 1 1939. 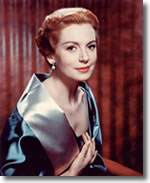 ediately cast in a bit part in director Michael Powell's film "Contraband" but her part was eventually cut from the film.

Despite this setback, Kerr was introduced to producer Gabriel Pascal who was looking for an actress to play Jenny Hill in the film adaptation of George Bernard Shaw's Major Barbara.

She was given a screen test and hired, but Pascal wanted her to gain more acting experience and he enrolled her in Oxford Playhouse where she would appear in several productions there.

At her own suggestion, Deborah joined the Salvation Army as a volunteer so that she could gain insight into her character. Filming commenced on Major Barbara in late 1940 and it was released in Britain in August of 1941. The film opened to glowing reviews and it was apparent that a new star was on the horizon.

That was followed by a series of other films, including the triple role of the hero\s loves in Michael Powell and Emeric Pressburger's The Life and Death of Colonel Blimp. It was her role as a troubled nun in Powell and Pressburger's Black Narcissus in 1947 which brought her to the attention of Hollywood producers.

Her British accent and manners led to a succession of roles portraying a refined, reserved, and proper English lady. Nevertheless, she frequently used any opportunity to discard her cool exterior.

In the 1950 jungle adventure film King Solomon's Mines, shot on location in Africa with Stewart Granger and Richard Carlson, she impressed audiences with a sexuality and an emotional vulnerability that brought new dimensions to a male-oriented action film.

She also departed from typecasting with her performance as Karen in From Here to Eternity (1953) for which she received an Oscar nomination for Best Actress. 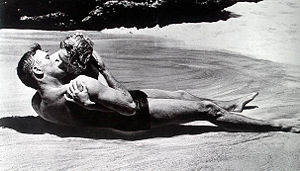 The American Film Institute acknowledged the iconic status of the scene from that film in which she and Burt Lancaster make love on a Hawaii beach amidst the crashing waves. The organisation named it one of "AFI's top 100 Most Romantic Films" of all time.

From then on her career choices afforded her one of the most versatile screen personas in Hollywood, ranging from nuns (Heaven Knows, Mr. Allison) and mama's girls (Separate Tables) to an earthy sheepherder's wife (The Sundowners) to lustful and beautiful screen enchantresses (Beloved Infidel, Bonjour Tristesse) and delicious comedy (The Grass is Greener).

Her most famous roles were, probably, as Anna Leonowens in the film version of the Rodgers and Hammerstein musical The King and I and opposite Cary Grant in An Affair to Remember. In 1967, at the age of 46, she achieved the distinction of appearing as a Bond Girl, Agent Mimi (below left), in Casino Royale.

In 1969, pressure of competition from younger, upcoming actresses made her agree to appear nude in John Frankenheimer's The Gypsy Moths.

This would be the only nude scene in her career, and concern about the parts being offered to her, as well as the increasing amount of nudity in films in general, led her to abandon film work at the end of the sixties in favour of television and theatre work.

As a stage actress, Deborah Kerr made her Broadway debut in 1953 in Robert Anderson's Tea and Sympathy, for which she received a Tony

award nomination. Kerr repeated her role along with her stage partner John Kerr (no relation) in Vincente Minnelli's film adaptation of the drama.

In 1955, she won the Donaldson Award, the Variety Poll Medal and the Sarah Siddons Award, all for for the best actress of the year, for her performance in Chicago during a national tour of the play. In 1975, she returned to Broadway, originating the role of Nancy in Edward Albee's Pulitzer Prizewinning play, Seascape.

She experienced a career resurgence in the early 1980s on television, when she played the role originally brought to life on film by Elsa Lanchester, in Witness for The Prosecution. Later, she teamed up again with multiple screen partner Robert Mitchum in Reunion at Fairborough.

This period also saw Kerr take on the role as the older version of the female tycoon, Emma Harte, in the adaptation of Barbara Taylor Bradford's A Woman of Substance. For this performance, Kerr was nominated for an Emmy award. 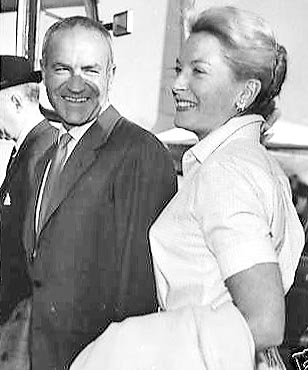 Deborah Kerr was married twice, first to Squadron Leader Anthony Bartley from 1945–1959. They had two daughters, Melanie Jane and Francesca. She and Bartley divorced in 1959, and a year later she married the writer Peter Viertel (right).

In 1990, when Glasgow was European City of Culture, she returned to Scotland as a member of the international jury of the European Film Awards, which were being organised by Helensburgh man David Bruce who was at that time director of the Scottish Film Council.

She suffered from Parkinson's Disease for a number of years, and although she had long resided in Switzerland and Spain, when her illness was diagnosed she moved back to Britain to be closer to her children.

Her death came peacefully with her family around her. Said her agent, Anne Hutton: “She had just had her 86th birthday and so was an elderly lady. She just slipped away.”

Her brother Edmund (Ted) Trimmer was murdered in a road rage incident in August 2004. Her father was a World War One fighter pilot who had a leg amputated.

In 1998, the Queen appointed the six time Academy Award nominee a CBE.

For her contributions to the motion picture industry, Deborah had a star on the Hollywood Walk of Fame at 1709 Vine Street, won the New York Film Critics Award for best actress four times, and in 1993 she was awarded an Honorary Oscar at the Academy Awards in recognition of the "perfection, discipline and elegance" of her screen work.