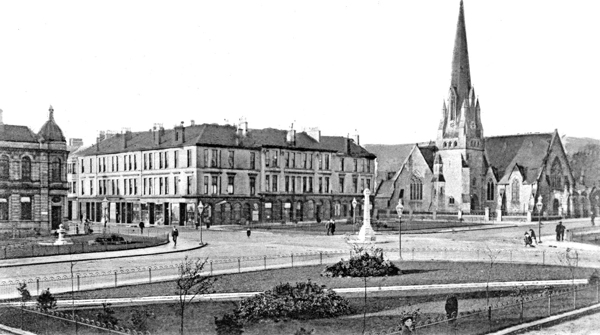 HELENSBURGH has always been a popular destination for day trippers and holidaymakers, despite its variable weather.

The visitors have been vital to the burgh’s economy and this was just as true a century ago. A Helensburgh guide book from the early 1900s noted: “Tourist people are no fools; well they know good summer quarters as the troutling knows the pools.”

The book, no.169 in The ‘Borough’ Guides series sold by John Menzies & Co. Ltd. of Glasgow and Edinburgh, price twopence, states: “The Helensburgh of today is nothing if not enterprising, and its fame as a health resort has sounded out to all parts of the kingdom during recent years.

“But the town does not appeal to the invalid alone; the business man and the intending resident know full well that here pleasure and economy go hand in hand, and that the advantages of a genial climate and a splendid situation are not counterbalanced, as in some places, by burdensome rates and taxes.

“When it is borne in mind also that some of the finest scenery in Caledonia is within reach by road or rail, that accommodation for visitors is good, and that there are ample facilities for most of the sports which find favour with the public at the seaside, the reader will understand how it is his friends are urging him to spend his holiday at Helensburgh, a right pleasant spot.”

The guide records that the seafront is a favourite spot for minstrels, Punch and Judy proprietors, ventriloquists and other entertainers, and of course in those days there was the bandstand roughly opposite the Imperial Hotel offering all kinds of entertainment.

One writer of the time enjoyed West Clyde Street on a summer afternoon. He wrote: “Helensburgh is a town dressed in white, and seems to be keeping perpetual holiday.

“In certain and not infrequent combinations of shade and sunshine it appears a miniature Venice, a city of the sea, resting its edifices with their clearly-defined outlines on the bosom of the burnished silvery waters.”

Two activities of those days are no longer appropriate. Health and Safety rules out hiring out rowing boats, which used to be much in demand, and swimming tends to be confined to the indoor pool. But in years gone by, a dip was very popular.

“The stretch of beach which runs in front of Kidston Park is a capital bathing place, and in consequence is largely patronised by lovers of aquatics,” says the guide.

“The shore of the East Bay also affords opportunities for bathing, but the beach below the western esplanade is decidedly rough, and no swimmer is allowed to take his dip here after 7am.

“Those whose joy of youthful sports is to be on the ocean’s breast, rise betimes, and disport themselves at the end of the pier.”

The guide states that not the least pleasing feature is the number of good public buildings which have been erected as necessity has arisen.

It continues: “Emerging from the handsome Railway Station in East Princes Street (built 1899), and turning westwards, we note the Municipal Buildings, which were erected in 1884 and enlarged in 1906, and which are decidedly handsome.

“The Victoria Halls, useful buildings, are frequently requisitioned for public meetings, lectures, concerts etc. and are also the property of the Corporation. Including renovations carried out quite recently, the cost of the halls was about £7,000.

“There is sitting room in the large hall for 1,000 people. The justly-admired Pillar Hall has been the scene of many a brilliant society function, and is admirably adapted for Balls, receptions and private parties.”

The guide mentions the Conservative Association rooms in Sinclair Street and the Liberal Association HQ in Colquhoun Street, then moves on to Colquhoun Square (pictured above around that time).

It states: “The Square is an open space which, though once a veritable desert, now ‘blossoms as the rose’. Four ornamental plots, tastefully laid out, have taken the place of what was little more than a disused quarry, and on each side of the Square are buildings worthy of more than a casual glance, notably the Union Bank, the handsome General Post Office, the beautiful West United Free Church, and several substantial private residences.

“In the centre of the Square the visitor’s attention is attracted by a red granite Celtic Cross which was put up as a memorial of the burgh’s centenary in 1904 by the late Sir James Colquhoun of  Luss.”

The guide considers the most handsome building on the seafront to be the Bank of Scotland, opposite the fine entrance to the pier which has been lengthened at various times and is now a popular rendezvous with pleasure-seekers.