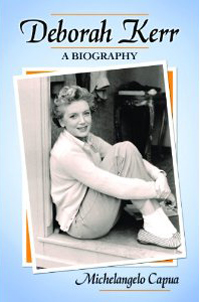 HELENSBURGH’S iconic film star Deborah Kerr, who died in 2007, is once again the focus of media attention this autumn.

She is the subject of a retrospective at the British Film Institute on London‘s Southbank in partnership with the Independent newspaper from September 1 to October 13, and a new biography will be published on October 20.

An article in the Independent about the retrospective commented: “It's a long way from Helensburgh to Hawaii.

“When you watch Deborah Kerr and Burt Lancaster in their celebrated clinch on the beach in From Here To Eternity — ‘nobody ever kissed me like you do!’ — you realise just what an extraordinary metamorphosis Kerr underwent in the course of her movie career.

“She seemed in her early film career to be the most upstanding and ‘proper’ of actresses. She had a shy and aloof quality.”

Film director Michael Powell cast her in 1943 at the age of 20 in her breakthrough film The Life and Death of Colonel Blimp, in which she played three parts, and he was the first to notice that she was much more than just a would-be starlet.

“Beneath that reserve, she was able to convey turbulent and unruly emotions: anger, fear and sexual desire,” the Independent article continued.

“Whether as the nun who ends up in the catfight with Kathleen Byron in Black Narcissus, the married woman having the affair with Burt Lancaster or the governess confronting terror in The Innocents, Kerr has a febrile quality a long way removed from the emotional detachment of so many of her contemporaries.

“That was why she managed to transform herself from an ultra-prim ex-ballet dancer into one of the biggest stars of her era.”

The new book is entitled simply Deborah Kerr: A Biography, and has been written by Michelangelo Capua. It is published by McFarland & Co. Inc., price £31.50.

The author is a London-based correspondent for an Italian film magazine and the author of several previous biographies of Hollywood stars, including Vivien Leigh, Yul Brynner and William Holden.