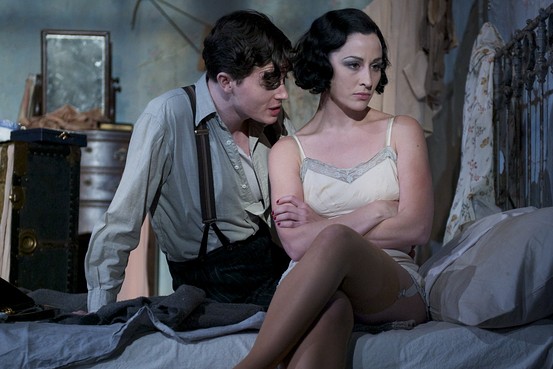 She is appearing in Ena Lamont Stewart's 'Men Should Weep", described as a moving and funny portrayal of impoverished 1930s Glasgow, a raw salute to the human spirit, at the Lyttelton Theatre. It is expected to run into January 2011 and stars among others comic actress Karen Dunlop.

But sniping neighbours, the flight of daughter Jenny, and the unexpected return to their overcrowded quarters of Maggie’s son Alex, played by Pierce Reid, and his sexually restless wife Isa, played by Morven, erodes her spirit. The couple are seen (above) in this Wall Street Journal image.

And then, just as temporary employment for beloved husband John affords a decent Christmas, wayward Jenny returns with new-found wealth, offering them the chance of escape and one big moral dilemma.

Critic Michael Billington wrote in the Guardian: “Sharon Small as the indomitable Maggie, Robert Cavanah as her ineffectual husband, Morven Christie as their hard-hearted daughter-in-law, and Anne Downie as the grumbling old woman inhabit this cluttered world as if it is their natural terrain. This remains a landmark play in British drama."

Paul Callan wrote in the Express: “There are other superb performances. Pierce Reid gives us the despicable Alec, whingeing and shrieking when his flirty wife Isa (a slinky display by Morven Christie) continually denies him sex. Their physical fight was frighteningly realistic.”

After leaving drama school in 2004, Morven, who is 5ft 3 ins tall with light brown hair and hazel eyes, was soon in demand on stage and screen.

Read the full story of Morven's career in the Heritage — The Arts section of this website. It can be found here.