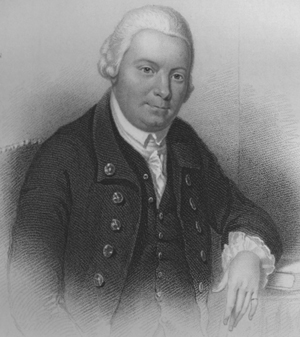 ONE of Garelochside’s most famous and colourful sons was known as Jolly Jack Phosphorus and invented a six pound gun . . .

But, much more importantly, he was the man who founded a Glasgow educational institution which became the University of Strathclyde.

John Anderson came from a religious family. His grandfather was a minister in Glasgow and Dumbarton and was Preceptor to the Duke of Argyll. His father James was minister of St Modan’s Parish Church in Rosneath from 1722 until his death in June 1744.

His mother Margaret, nee Turner, gave birth to him at the manse in Rosneath on September 26 1726 and he spent his childhood on the peninsula.

He graduated MA from Glasgow University in 1745 and that year was an officer in an army corps raised to resist the Jacobite rebellion. He became an artillery expert and in 1759 he planned the fortifications prepared to defend Greenock against a French squadron of ships which spent some time in the Clyde posing a threat.

He worked as a private tutor until he was appointed Professor of Oriental Languages at the university in December 1754 — transferring three years later to the chair of Natural Philosophy. From 1768 he was also Clerk of the university, and he held both appointments until his death.

He greatly enjoyed scientific experiments, practical mechanics, and devising inventions, and he encouraged steamer power pioneer James Watt. He installed the first lightning conductor in Glasgow in 1772, and he published learned academic papers on both physics and the use of artillery.

He believed in providing what he called useful learning to the working class, particularly in applying science to industry, and gave popular non-academic evening lectures for working men and women which they attended in their working dress.

He held their attention with experiments and demonstrations, and it was his love of setting off fireworks and explosions which led to his being given the Jolly Jack Phosphorus nickname.

He published in 1786 the ‘Institutes of Physics,’ which went through five editions in ten years. He wrote various periodical papers, one of which, ‘Observations upon Roman Antiquities lately discovered’, appeared as an appendix to Roy's ‘Military Antiquities’ in 1793, and was separately published in 1800.

He also helped to obtain a collection of Roman remains, found near the Antonine wall, for the university.

He supported the French Revolution from 1789-99, and he presented his six pound gun — which had been rejected by the British Government — to the French nation in 1791, calling it ‘the gift of science to liberty’.

At that time of unrest Germany banned French newspapers, so he suggested sending pamphlets attached to small hydrogen balloons.

Each balloon carried an inscription which translated as ‘O’er hills and dales, and lines of hostile troops, I float majestic, bearing the laws of God and Nature to oppressed men, and bidding them with arms their rights maintain’.

Back home he was a quarrelsome individual who became heavily involved in the factional squabbling and costly litigation which plagued Glasgow University during the late 18th century.

Embittered by the experience, he bequeathed, in a will drawn up in May 1795, his estate to found a second university in the city.

He died in Glasgow on January 13 1796 at the age of 69, and in June of that year Anderson's Institution, one of the ancestors of the University of Strathclyde, was founded by his executors to offer ‘useful learning’.

In 1887 Anderson's Institution's medical college, founded in 1800, was incorporated as a separate and distinct institution, Anderson's College Medical School — later the Anderson College of Medicine — and in 1947 the college was absorbed by the university.

Today the university honours him with the name of the main library and the physics building, and the city centre campus is named the John Anderson Campus.

There is a memorial stone to him on the east wall of the Ramshorn Theatre in Ingram Street, and on the 200th anniversary of his death, in the presence of some of his descendants, the Principal and the Chancellor of the university laid a wreath beside it.