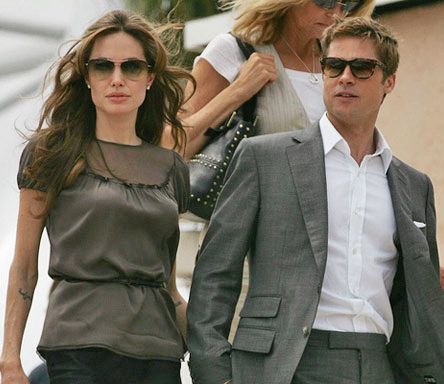 The famous Hollywood couple, who are in Scotland as Brad shoot scenes for a zombie movie 'World War Z', arrived for a private tour which had been booked for 10 people.

But rather than the expected group of sightseers and holidaymakers, the movie stars appeared instead.

Delighted National Trust for Scotland staff showed the couple round the beautiful Upper Colquhoun Street mansion, built for Glasgow publisher Walter Blackie between 1902 and 1904, and its grounds.

Lorna Hepburn, the Trust’s manager at Hill House, said: “Mr Pitt explained that he had previously visited Hill House 15 years ago and that he was a big fan of Charles Rennie Macintosh. He had been waiting for an opportunity to return ever since.

“Both he and Angelina were both extremely relaxed and friendly, and clearly very interested and knowledgeable. They were particularly taken with the decor of the world-famous master bedroom.

“We treated them with the same courtesy we would extend to any visitor, and let them enjoy their tour without intrusion or interruption.

“After they had gone, we all felt exhausted but so grateful to realise that Hill House remains so renowned and appreciated from Helensburgh to Hollywood.”