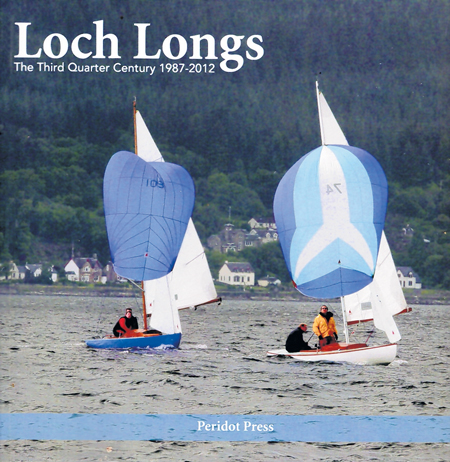 THE long-awaited 'next chapter' in the story of the Loch Longs, the gutsy little racing yachts designed and built at McGruer and Company on the Gareloch, has been published.

Jamie Bruce Lockhart brings the story right up to date in his follow-up to “Loch Longs the First Fifty Years” which was published for the Golden Jubilee of the class with “Loch Longs, the third quarter century 1987 - 2012.”

But newcomers to the class who have not been around long enough to have been given the first book 25 years ago need have no fear, Jamie begins with a potted history of the story from 1937 to 1987, before moving on to the subsequent quarter century.

Jamie pays tribute in his preface to the original publication which was “painstakingly researched by John McMurtrie and enjoyably presented by Ruth Wishart”, with illustrations by Ruth’s husband, the late Rod McLeod, the famous Glasgow cartoonist.

Kilcreggan woman Ann Bray provides a forward for the new book in which she says: “Jamie Lockhart concentrates on the links and co-operation between the Clyde and the River Alde that have developed in this period.

“Friendships have been formed and the sight of a Loch Long being towed up and down the motorway has become common," she wrote.

“New boats have been built, though the old ones still compete successfully with them. We hope that Loch Longs will still be sailing for the next 25 years and that volume three will appear for the centenary.”

The tale that Jamie tells is one of the fluctuating fortunes of the much-loved little yachts as the vagaries of life in the late 20th and early 21st century make maintaining and sailing such venerable craft a taxing undertaking.

The first section looks over the historical background before the story moves on to cover the origins and growth of the Loch Long Fleet at Aldeburgh and the development of the Alde-Clyde partnership in which many local Loch Long owners have played a major role.

The third section looks at the racing affairs of the Loch Long Association and the individual fleets in the last 25 years, and the fourth focuses on pressures for change in the rules of the class and how it has been managed.

The fifth part takes in some anecdotal tales from the bar and jetty relating to the life of the sailors and boats, while the book concludes with some personal thoughts from the author on past changes and prospects for the future.

Fascinating even to non-sailors, this delightfully illustrated book features many well-kent local names and is a must for enthusiastic sailors everywhere.