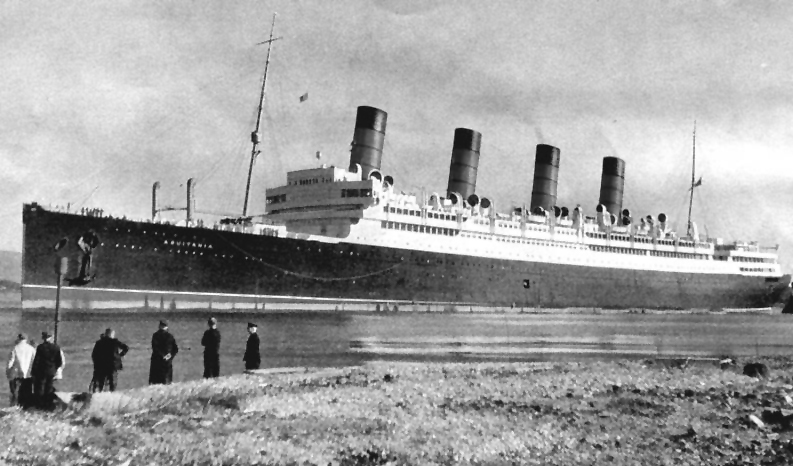 A DINGHY which set off from Helensburgh during World War Two was nearly run down in the Clyde by the liner Aquitania.

But the dinghy and its occupant — young scientific officer Eddie Baird from the Marine Aircraft Experimental Establishment which was based at RAF Helensburgh during World War Two — fortunately escaped unscathed.

In 2011 Eddie contacted Robin Bird, who has written two books about MAEE, with a wealth of stories about his time there between 1944 and 1945.

A young man from Glasgow, Eddie joined MAEE as a civilian scientific officer.

He told Robin that he remembered that transport to the Glen Fruin water testing tank was by an old bus. But that was nothing compared to his experience when ordered to take part in lifeboat trails out at sea.

The liner’s 23 knots allowed her to cross the Atlantic in six days, unescorted, but as she approached Scotland’s west coast, two destroyers acted as escorts as they steamed into port.

Eddie said: “They did not give way to sail, not least to a little dinghy belonging to MAEE. Fortunately I survived to tell the tale.”

He went on to work on the Saro jet seaplane project described elsewhere in this section of the website.

Cunard’s majestic liners Queen Mary, Queen Elizabeth and Aquitania all served as troop ships sailing from New York into the Firth of Clyde.

The Gareloch too was full of ships of all types and sizes involved in the war effort, even midget and two- man submarines. Convoys assembled at the Tail o'the Bank for their hazardous journeys.

MAEE launched seaplanes, flying boats and small marine vessels such as tenders, prototype lifeboats and inflatables in the loch off Rhu — a pleasant experience in good weather, and there was even time for a spot of fishing.

However, MAEE trials also demanded that dinghies and life saving equipment were tested to their limits in rough seas. This often involved them being dropped into the sea from a Catalina, or an RAF motor launch.

Air to sea rescue trials were an important part of MAEE’s role as it meant many lives could be saved when aircraft ditched at sea.

On one occasion the fuselage of a Blackburn Botha was dropped into the sea from a crane, so that the men inside could experience and report on ditching.

In charge of the marine section was Vincent Drake, who was housed in Helensburgh. Robin’s father, MAEE photographer Bob Bird, remembered having meals at the Drakes — and enjoying a variety of fish dishes.

When MAEE moved back to Felixstowe after the war, Mr Drake went with it to continue trials of air sea rescue equipment, including a new airborne lifeboat first tested in the Gareloch.

Robin Bird has fully researched the story of MAEE for his books and has spoken to numerous people, who served during the war.

This has taken considerable time as those who still survive are scattered all over the county. There is no ex-MAEE group of RAF squadron association catering for these ex-comrades, a large proportion of whom were civilians.

Articles on this website have resulted in people contacting Robin, and he would be delighted to hear from any more.

His hope eventually is to have a memorial erected overlooking the Gareloch to those MAEE staff who lost their lives during the war.

Of course the Aquitania herself ended her days in the loch.

On February 21 1950, the famous old liner completed her 443rd voyage after passing through Rhu Narrows to reach the Shipbreaking Industries yard at Faslane.

She was the last of the great four-funnelled Atlantic liners and the largest ship to pass through the then 150-yard channel between Rhu Spit and Rosneath, nursed through by tugs on her way to the ships graveyard.

The Cunard archives record that she was the longest serving Cunard liner built in the 20th century, and saw service in both World Wars.

It is estimated that she steamed three million miles and carried some 1.2 million passengers.