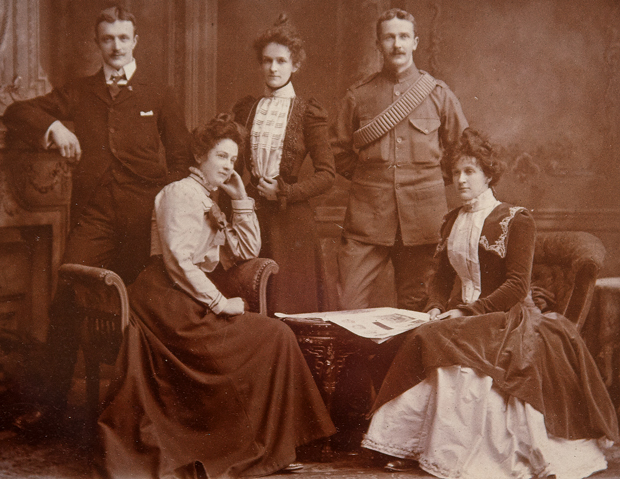 HELENSBURGH men gave patriotic service in the Boer War from 1899 to 1901 — and were rewarded with carriage clocks.

Poor logistics and disease made the South African campaign a tough one for the British soldier, men often having to go without basics such as food and water, and enteric fever — which killed many thousands — was a constant drain on manpower.

This combined with having to fight a guerrilla war against a disciplined and capable enemy made it a very hard campaign. The Boer were excellent horsemen and marksmen.

This was recognised at home, so when the Volunteers, Yeomanry and sharpshooters came back from the war they were given a reception in the Victoria Hall in June 1901 by the Provost, Colonel William Anderson, and the Magistrates, in the presence of the Lord Lieutenant of the County, Sir James Colquhoun.

Attending were most of the 22 soldiers from the district who took part in the conflict, but some of them were still in South Africa.

A large gathering of local people attended the reception, and tea was served before the Provost, local dignitaries and the soldiers in uniform made their way to the stage.

The Provost said that they were met together representing the burgh and the neighbourhood to do honour to men who had done honour to themselves.

He said that after making allowances for the very natural taste youth had for adventure, he thought these men had been actuated by the best motives, the most patriotic motives possible, in offering themselves in a dark hour to give their services for their country and their Sovereign.

He said that the purpose of the reception was to express goodwill and gratitude for their actions, and to ask them to accept a token of their recognition of their services. 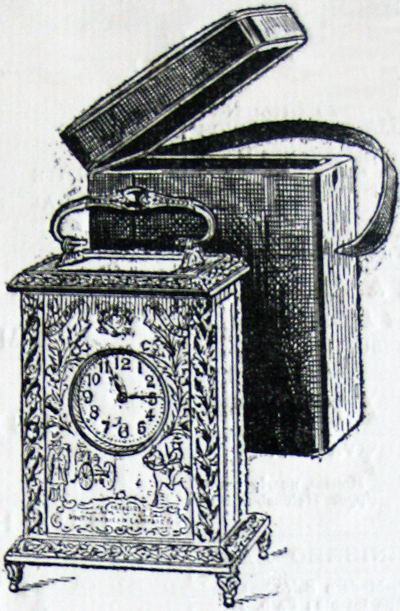 The Provost said that a carriage clock, a sample of which was on the platform, would be sent to each of them. In fact they were presented personally at a ceremony in the Municipal Buildings in November of that year.

Two Sergeants replied, and three cheers were given for those still in South Africa.

The clock was made to a special design by Messrs Elkington & Co. of London of oxidised silver and brass.

Above the dial is a reproduction of the burgh coat of arms, with South Africa and 1899-1901 on either side. At the foot of the dial is an Argyll and Sutherland Highlander, a field gun, and an Imperial Yeoman.

The inscription reads: “Presented to ………………………. in recognition of patriotic service in the South African Campaign — June 1901.”

In 2012 information about two of the clocks came to light.

Richard Johnson from Edenbridge in Kent got in touch to say that he was researching the history of the clock which was presented to Private McKinlay.

“I volunteered to help with research into this fine antique clock, which turned up at our local antique shop,” he said. “It was a chance encounter in the shop with the dealer, Derek Roberts.

“I dabble, no more, in some military research and, because I find it interesting, I agreed to help if I could. I think the main area of interest revolves around the fact that such a fine clock was presented to a Private. He must have been very highly regarded locally.” 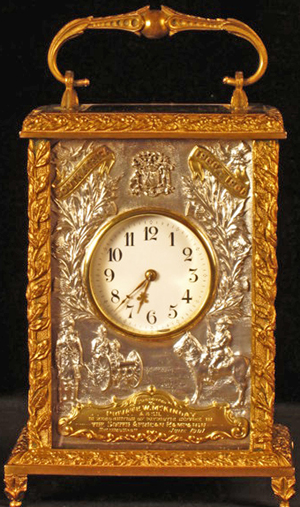 Private McKinlay’s clock is in pristine condition and was on sale in Edinbridge at £5,650. However in April 2013 it was bought by the Trust for £5,000 with the help of a donation from an anonymous benefactor.

Information about the second clock came from Mrs Mairi Gallagher in Rhu. There is damage to the face of this clock and it would not be so valuable.

She said: “It was presented to my great grandmother’s brother, John Westwood McCulloch, and it is on my mantelpiece and still works!

“His father was William Lawrie McCulloch, a local painter and decorator, who lived at a house called Locheil which is at the bottom of Suffolk Street. The firm remained in the family and carried on in the town for many years.

“His grandfather was John Westwood McCulloch, who was the local police commissioner. He lived in a house called Greenhouse next to the home of Lady Augusta Clavering on West Clyde Street.”

The story had a sad ending. Another relative, David Walker Coutts, died in South Africa about 1900, while Trooper McCulloch died at home in 1906 at the age of 30, having never married.

Mairi added: “The family story is that he was traumatised by the war and was never the same when he came home.”

The clocks originally cost ten guineas each, and the total cost to Helensburgh Town Council was £261, including a plaque which was erected in the Municipal Buildings and is still there.

This contains 44 names, and it is likely that the second 22 served there in 1902 when the Boer were still conducting an effective guerilla campaign, but did not receive clocks when they returned.