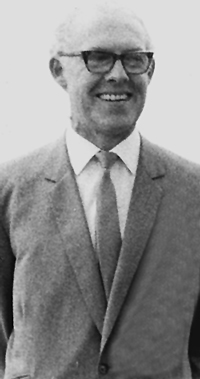 A HELENSBURGH hotel manager was involved in one of the best-planned escapes from a German Prisoner of War Camp in World War Two.

The late Norman Drummond was the urbane, charming and highly regarded manager of the town’s Queen’s Hotel from 1947 until the hotel closed early in the 1980s, and during that era it was the area’s top hotel.

A shooting and fishing enthusiast, he was a member of Helensburgh Lions Club in its heyday and was counted as a friend by many well known people who stayed or dined at the seafront hostelry first opened by Comet steamship pioneer Henry Bell in 1807.

After the hotel closed — its owners, a Greenock company, unwilling to face the costs of the major refurbishment required to modernise it — he retired and spent most of the rest of his life in the town. He died in 2010.

Norman sometimes told close friends about life as a prisoner of war, and in particular of the time in May 1944 when he escaped from Stalag 383 at Hohenfels, at the foot of the Bavarian Alps, dressed as a professor and accompanied by another escapee dressed as his wife.They got as far as Vienna before being recaptured.

Around September 1943 Norman, at that time a Battalion Quarter Master Sergeant, hatched a scheme with Corporal Eddie Freestone to escape dressed as women, and started growing their hair.

By May they had amended the plan — Norman would be dressed as a professor, and Eddie as his wife.

Eddie as a brunette was slender, beautifully coiffured, dressed in a sophisticated ‘three piece ensemble’ and had that touch of lady-like distinction about shoes, stockings and handbag.

Nine months after they had started planning, they hoped to escape from Hohenfels, reach Vienna, and from there make their way through Hungary and the Balkans to Syria and the Allies.

The final guise was as a professor and his wife, travelling from Copenhagen University to Vienna University for the purpose of studying veterinary science for the Wehrmacht.

Both spoke German quite well, and fellow prisoners collected and created suitable clothes and everything else they might require. False passports and other necessary papers were prepared for them.

The actual escape method used by Norman and Eddie was the original idea of two Australian prisoners, Steve Young and Ted Paton.

On May 19 they and their kit were smuggled into the Red Cross store where Germans worked, and hidden behind piles of parcels until lunchtime when the Germans locked the store for a break.

Another prisoner stayed behind in the store ‘to catch up on his work’, and he helped Norman and Eddie climb into rubbish sacks, with their suitcase and kit in other sacks.

When the Germans returned, they ordered a fatigue party of prisoners to pile the sacks on a small cart and take it to a building outside the main camp. This they did, passing through the two massive camp gates.

At 10.30pm the two men were able to escape on to the roof. They had to avoid the searchlight from a nearby watch tower and a sentry down below, so had to take their time. Eddie dropped into a ditch, and Norman lowered the kit to him, then followed.

It was now 1am, and they began the long careful crawl out of the danger area, before walking towards the village of Hohenfels. By dawn they were at least six miles away from the camp, and they hid for the day in a thick wood.

When night fell they changed into their husband and wife clothing, buried their uniforms, and walked to the Parsberg railway station.

The gaze of the first women they encountered displayed admiration, not suspicion, of the young couple, which assured them that the ensemble and coiffure were suitable.

Norman bought tickets for Regensburg without difficulty and when they arrived at this important junction, he bought first class tickets to Vienna.

During much of the 280-mile journey, the couple stood in the corridor, as they did not wish to chance either conversation in a crowded compartment, or a rather too noticeable silence.

Norman and Eddie braced themselves for a stiff test at Vienna station, where it seemed highly probably that there would be at least an examination of papers.

But when the train reached Vienna at 3pm, the professor and his wife just clutched their suitcase and handbag respectively, surrendered their tickets at the barrier, and had no contact with officials, except when Norman sought the correct platform for the next stage of their journey — by underground.

The short tube ride to the Donau canal district of Vienna was marked by a strap-hanging conversation with a German Wehrmacht officer who asked what part of Denmark they came from.

The next stage was in the lap of the Gods. Everything depended upon their luck in finding a contact who could help them on their bid for freedom.

All that they had to go on was the description of a certain cafe and the tip that it was once used by an agent friendly to the Allied cause.

After a good deal of careful ‘recce’ work, Norman and Eddie decided that one particular cafe more nearly answered the description given than any other, so they marched inside, sat down and ordered coffee.

No-one looked like a possible contact, so they went to a cinema and saw their first film show for four years.

They went back to the café about 6pm, and eventually Norman spoke to the manager, and the way he spoke about the Germans encouraged them to ask if he knew anywhere he and his wife could spend the night.

He said he would send his wife to talk them, and her conversation became more and more anti-Nazi. But then Norman spotted police outside, and three plain-clothed Gestapo men burst in holding revolvers.

It was all over. They stood with their hands up, and Norman said: “We’re British soldiers . . . escaped prisoners of war.” 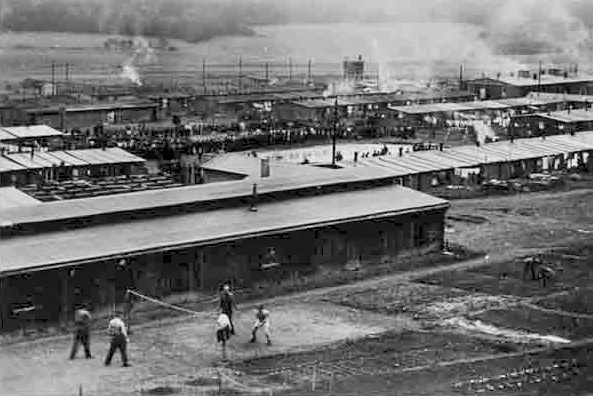 At first the Gestapo men did not believe that Eddie was not a woman, but one of them tore open his blouse to reveal false breasts.

Handcuffed together, and escorted by a large crowd, including some delighted youngsters, Norman and Eddie were marched through the streets to the nearest police station.

Here they were able to produce their Stalag identification discs, and after a great deal of questioning it was grudgingly accepted that they might really be escaped British soldiers.

They were locked up for the night in separate cells with their hands handcuffed behind their backs, then early the next morning they were taken to the main Vienna police station where they were questioned for hours by Army police, civilian detectives, the Gestapo, and several Wehrmacht officers.

Next they were taken to the infamous Vienna Zuchthaus, a remand prison for criminals and a distribution centre for concentration camps, where they were put into a small cell with 27 other captives.

They were there for a week before three guards from Stalag 383 came to collect them, with Eddie still looking like a glamorous if now scruffy woman. Back at the camp their fate was 14 days in the cooler.