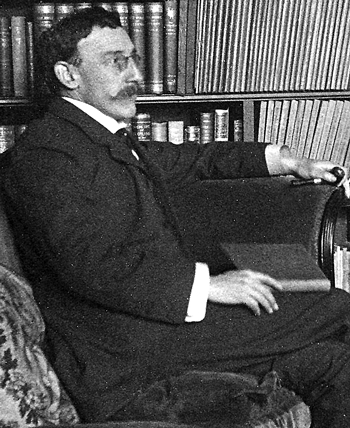 HELENSBURGH'S former Clyde Street School and Community Centre and the Hermitage Park War Memorial are two of the best known works of a leading burgh architect and artist.

Alexander Nisbet Paterson, ARSA, FRIBA, RSW, was born at Berkeley Terrace in Glasgow, near to the Mitchell Library, the fifth son of cotton manufacturer and merchant Andrew Paterson.

He went to school at the Western Academy and Glasgow Academy, then graduated from Glasgow University with an MA degree in 1882.

When Alexander came back to Glasgow, he became an assistant to Pascal's former pupil, J.J.Burnet, then completed his training in the London offices of Robert W.Edis and Aston Webb, for whom he worked on the drawings for the Victoria And Albert Museum, and who influenced his taste for Edwardian Baroque. 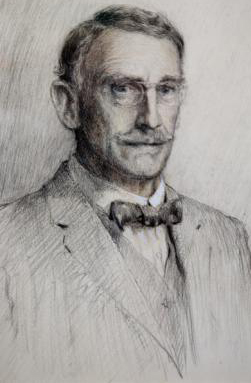 In 1889 he won the Royal Institute of British Architects silver medal and passed the qualifying exam. He was admitted ARIBA on March 3 1890, and became a Fellow in 1910.

In 1896 he won the Godwin Bursary which enabled him to tour the United States.

He established his own practice in 1891, producing designs for the Kelvingrove Art Gallery competition, the Carnegie Aquarium at Edinburgh Zoo, Golfhill Primary School in Dennistoun, the Robert Maclehose Printing Works, Foulis Street — later the University Press, and several houses in Helensburgh.

Two years earlier he moved to Helensburgh and married the painter and expert needlewoman Maggie Hamilton, sister of another renowned painter, J.Whitelaw Hamilton.

They set up home at Ard Rhu, 22 Millig Street, at that time called Turret, then moved to Long Croft at the west end of Rossdhu Drive which he designed in 1901 and regularly extended and improved in the years which followed.

In 1902 he was commissioned to design an extension to the Municipal Buildings in Sinclair Street, to contain a Police Office with cells, a Fire Station, and an entrance to the Court Hall. On the outside can be seen a stone cat and handcuffs.

His finest commercial building in Glasgow is the former National Bank of Scotland, 30 St Enoch Square, built from 1906-7.

Contemporary with this is the highly regarded Liberal Club, 54 Nelson Mandela Place, which he ornamented with decorative work by an unidentified carver.

He also designed monuments for cemeteries, such as the monuments to his mother Margaret Hunter and Prime Minister Andrew Bonar Law in Helensburgh Cemetery, and the Sir James and Lady Guthrie Memorial in Rhu Churchyard.

Elected president of the Royal Incorporation of Architects in Scotland in 1906, and an Associate of the Royal Scottish Academy in 1911, he regularly exhibited architectural designs and watercolours.

He was elected a member of the Royal Scottish Watercolourists in 1916 and went on to combine architecture and art with playing a major part in town life. He was for a period a manager in St Columba Church, and later an elder in the now-demolished St Bride's Church.

His other interests were music, golf, hill-walking and the Ancient Monuments Board for Scotland, of which he became a member in 1930.

He died at Long Croft on July 10 1947, and was buried in Helensburgh Cemetery. Another famous local architect, William Leiper, designed a large Celtic cross to mark the grave.

In 1962 his son, Colonel Alastair Paterson, was elected the first and only Honorary Burgess for his services to the community, not least as Burgh Treasurer.

His daughter Viola, born in 1899, inherited the artistic ability of her parents, spent much of her life in Europe, but returned to live at Long Croft after her mother’s death in 1952, until her death in 1981.

Viola is remembered for colourful oil paintings and innovative woodtype prints, and was equally talented as a colourist in oil, watercolour and as a lithographer and engraver.

She studied with Henry Tonks at Slade School of Fine Arts and from 1919-23 attended the Glasgow School of Art under Maurice Greiffenhagen. In 1924-25 she studied in Paris at L'Academie de la Grand Chaumiere with Lucien Simon Besnard and then with Andre L'Hote.

She continued to paint in France, although she travelled around Europe, but returned to Britain in 1941. During World War Two she worked for several years for the Admiralty in Oxford.