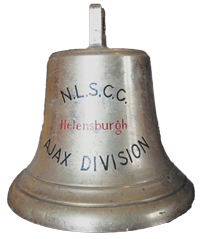 A MYSTERY bell inscribed with 'Helensburgh' and discovered in an antique shop in the south of England made its way back to the town where it is believed to have originated.

Andrew Joyne, who lives near Canterbury, was given the bell by a friend who used to run an antique shop in Ramsgate, Kent. It is inscribed 'NLSCC/Helensburgh/AJAX DIVISION'.

He suspects the first part stands for Navy League Sea Cadets Corps, and may refer to HMS Ajax, which was launched in 1934 and was present at the Battle of the River Plate in December 1939.

He got in touch with Lieutenant Lesley Leckie RNR, of Helensburgh Sea Cadets, who was delighted to hear of the find, and arranged for the bell to be delivered back to Scotland.

Andrew said: "I was intrigued by the inscription on the bell, and carried out some research.

"It is obviously part of the maritime heritage of the Clyde, and I wanted it to be returned to its rightful place. It is seven inches high, with a bell-mouth diameter of eight inches.

"Quite what a bell marked 'Helensburgh' was doing in the far south-east of England is a mystery, but at a guess I would say the quality of the metal and the style of inscription indicates it is from the 20s or 30s.

"It might be from the King George V Class battleship HMS Ajax, which was broken up in 1926, or, more likely, the Leander Class cruiser HMS Ajax."

Because of its significance to Helensburgh, Andrew thought it should be returned and arranged for it to be given to the Sea Cadets at their Cumberland Road headquarters in Rhu.

It was presented at a special ceremony in August 2012 by James Barr, Andrew's brother-in-law and a former Royal Marines officer, to commanding officer Lesley Leckie RNR.

James explains said: "A ship’s bell to a warship was akin to the Colours of a Regiment. We both felt that this bell — which probably dates back to the very early days of Sea Cadets — should make the journey home.“

Captain Nick Davies RN, chairman of the Unit Management Committee, said: "Although we do not know its origins for sure, it obviously has a strong association with the Helensburgh Sea Cadet unit, and as such it is an important part of the unit's history.

"The cadets are excited to have it in its rightful home."