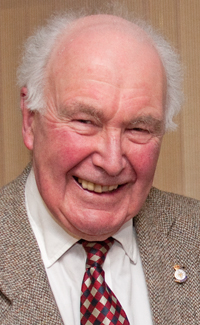 OVER 400 people attended a Service of Celebration and Thanksgiving at St Michael and All Angels Church, Helensburgh, on Friday October 12 for the life of Helensburgh Heritage Trust's company secretary and treasurer, John W.P.Johnston, C.A.

Ever cheerful, smiling and helpful, John, of Rhu Arden, 1 Upper Sutherland Crescent, died at the Vale of Leven Hospital, Alexandria, on Thursday October 5 after a short illness.

He is survived by his wife Penny, one of two remaining members of the well known Kidston family still living in Helensburgh, four children and four grandchildren.

A former Guards officer who became a chartered accountant, he was in business in London for many years before retiring to the burgh, when he soon became active in many local organisations.

He was an active member of St Michael's Church and was closely involved in fundraising for its extensive nine year restoration project.

He became a director of Helensburgh Heritage Trust in 2001 and its company secretary and treasurer four years later. He had similar roles in the Comet 2012 Bicentenary Project, which the Trust instigated.

John's great interest in local history and heritage was also reflected in his membership of the Loch Lomond and District Fine Arts Society, and he was a director of the Dumbarton Castle Society from 2008.

He was also a great supporter of Helensburgh Rugby Club, and a minute's silence was held before the start of the club 1st XV's match on Saturday October 7.