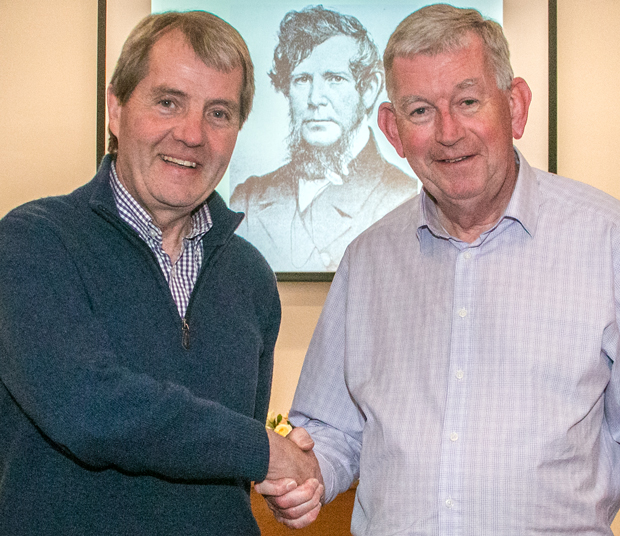 THE EARLY days of the Kirk in the Square were outlined to members of Helensburgh Heritage Trust at their final open meeting of the 2016-17 winter season on Wednesday evening.

The speaker in Helensburgh and Lomond Civic Centre in East Clyde Street was a former minister of the kirk, the Rev David Clark, who is chairman of the Heritage Trust and who at short notice replaced a guest speaker struck down by food poisoning.

In the audience while on an official visit to Dumbarton Presbytery were the Right Rev Dr Russell Barr, Moderator of the General Assembly of the Church of Scotland, and his wife Margaret.

Mr Clark, who is the Clerk of Dumbarton Presbytery, said that the first kirk in Colquhoun Square was a very small building erected in 1825 by the Old Light Burghers.

It was soon too small, and in 1850 the congregation decided to build a bigger one, which took a year and cost just over £4,000.

It was severely damaged by a fire in 1924, and over the next two years it was rebuilt and refurbished in the form it is today. After having several names over the years, it is now Helensburgh Parish Church.

“For a minister, it is a superb building to work in,” Mr Clark said.

He went on to talk about the first minister, the Rev John Anderson, a distinguished preacher and author, who was in post until 1863 when his health began to decline.

A major event during his ministry was the explosion off Helensburgh of the steamship Telegraph on March 29 1842, in which 20 passengers and crew were killed and many others burned and maimed.

One of the victims was his housekeeper’s husband.

A problem he had to deal with was much local rumour about an elected Deacon and choir stalwart, licensed grocer Alexander Breingan.

It was said that he was seen rather often in the company of a young married woman called Margaret Colquhoun, whose husband Henry was away from home a lot.

Mr Breingan, later to be Provost of Helensburgh from 1863-69, had to withdraw from the Deacons Court while the matter was investigated.

As a result Henry and Margaret Colquhoun left the town in 1854 to start a new life in Australia.

He also had to handle controversy over the arrival of the railway in Helensburgh, and led the opposition to train services on Sundays.

The picture shows Dr Barr and Mr Clark in front of an image of Mr Anderson.