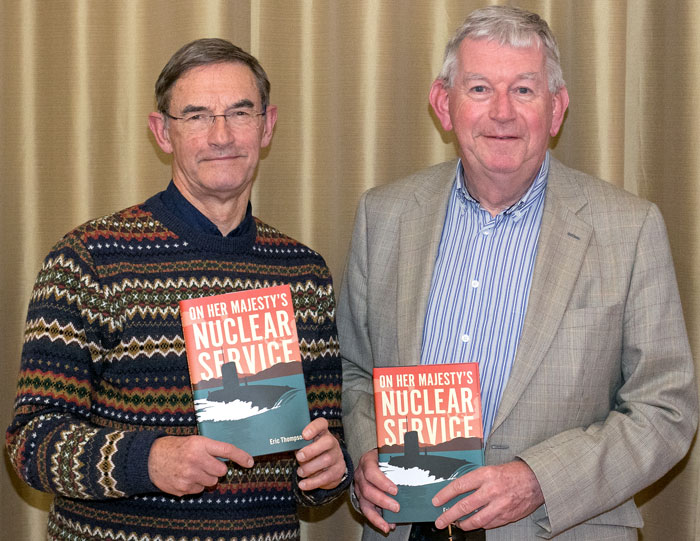 THE REAL peace keepers of the Cold War were the navymen of the Faslane-based nuclear deterrent submarines.

That is the belief of former Commodore Clyde Eric Thompson MBE who spoke to members of Helensburgh Heritage Trust in the Helensburgh and Lomond Civic Centre on Wednesday evening.

At the Trust’s final open winter meeting of 2018, the Helensburgh man and former Argyll and Bute Liberal councillor gave an entertaining talk based on his new book, ‘On Her Majesty’s Nuclear Service’, which has been voted runner-up in the Mountbatten Best Book Award 2018 out of 38 shortlisted books.

He said that the Royal Navy submarine service celebrated its centenary in 2001, and Helensburgh had been directly connected with it for over half a century — with the first submarine coming to the Gareloch during World War One and a supporting role during World War Two.

“This year is the 50th anniversary of our nuclear submarine deterrent programme. The mission is to prevent World War Three, and so far it has succeeded,” he said.

Born in Coatbridge, he followed his father into the navy, and after service on surface ships he volunteered to become a submariner.

“The book chronicles my years of service during the Cold War,” he said. “It is an authentic record of what life was like on nuclear submarines during that period, which ended in 1991.

“They were the real peace keepers.”

Mr Thompson, who is a well-known writer and after-dinner speaker, showed a video of appropriate photos with a naval music soundtrack, and read several extracts from the book before answering questions.

He was introduced by Trust chairman David Clark, and the vote of thanks was given by Trust director Robert Ryan.