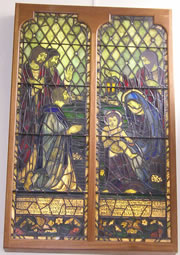 The right half shows a seated Madonna with the child on her knee and St Joseph standing behind them holding a lantern. 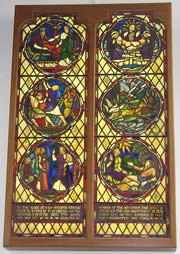 The Rev John Baird, the father of John Logie Baird, was the first minister of the West Established Church in Helensburgh, later known as St. Bride’s Church.

In 1981 this Church was united with the Church in the Square (then known as Old and St Andrews) to form the West Kirk. St Bride’s Church was later demolished, the Church of Scotland making the stipulation that the windows should be kept in a safe place.

They remained in the care of the builder A.Trail and Son until, in 2000, he offered them for sale.

One of those pairs of windows was dedicated to the memory of the Rev. John Baird and is a wonderful mosaic of red ruby glass. 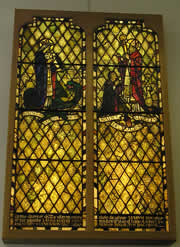 The composition is based on a window from Chartres Cathedral of six roundels, three in each light. The theme of the first three is of builders and the other three of the calling of Christians.

The Heritage Trust decided to save and restore the windows if sufficient funds could be raised. At this point Argyll and Bute Council stepped in and, with the help of the National Fund for Acquisition, acquired two pairs of windows, one of which was the Baird window.

Later, the Heritage Trust bought the third pair. A total of just over £10,000 was required to restore, frame and install the three pairs of windows in the Library in West King Street, and this was raised through donations, part of a legacy, a coffee morning and a Lottery grant.

A place was found for all three pairs of windows in the library — which was of course built on the site of the demolished St Bride’s Church.