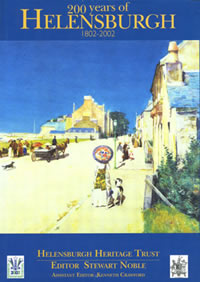 Page 11, para 3, last line. The multiplicity of spellings in Blaeu’s map may also be due to the difficulties which his Dutch printers had in reproducing Gaelic place names.

Page 16, end of para 2. It has however been argued that, while the term “Clearances” may not have been used in this area, there was nevertheless considerable displacement of population from traditional settlements. The Colquhouns of Luss were among the pioneers of sheep-farming probably from 1757, but at the same time the provision of alternative employment elsewhere in their estates became available for the displaced tenants.

Page 18, para 1. 1799 Statistical Account written by Rev John Allan (junior) – he had succeeded his father of the same name as Minister.

Page 23, 3rd last line. Cnoc Elachan means Hill of the Black Willow; it is located near Rossdhu and was the gathering place of the Clan Colquhoun and hence also their call to arms.

Page 26, 3rd last line. Although impossible to prove, it is generally accepted that sheep were introduced to Glen Mallochan by tenant farmer, John Campbell probably from 1757, not 1769. The Statistical Account of Scotland in 1791-99 recorded about 7500 sheep in Luss Parish.

Although the MacAulays and the Colquhouns are the families most associated with being Lairds of Helensburgh, they were not the only ones. From at least the middle of the 15th century West Milligs was in the hands of the Galbraiths of Culcreuch (near Fintry in Stirlingshire). The MacAulays and their predecessors had been at the adjoining Ardincaple since the 13th century, but apparently only acquired Milligs after 1513.

The records are very sketchy and the nature of the Galbraith ownership or tenancy is unclear – under the feudal system it is possible that they became a form of sub- owner to the MacAulays. What is certain is that there was a long feud between the Galbraiths and the MacAulays. However sometime after 1593 the MacAulay of Ardincaple married the widow of Galbraith of Culcreuch. This in turn led to something of a truce between the two families in 1612 when Robert Galbraith and his wife, probably under some pressure from higher up, gave legal possession of West Milligs to his mother (now the wife of MacAulay of Ardincaple), and thus the Galbraith connection with Helensburgh came to an end.

Another prominent family of Lairds were the Dennistouns of Colgrain. The owned Camis Eskan House were over 500 years until selling it in 1836.

Page 37. [Add to caption] At the same time a grateful public also presented him with a handsome set of silverware along with a list of all the donors; these were gifted to Helensburgh Heritage Trust in 2005. He was also given a copy of the portrait.

Page 39, end of para 5. [add] At the same time Colgrain acquired its own Community Council.

Page 41, para 5, line 8. The wreathed savage with the club over his shoulder is also part of the Sutherland coat of arms. The medallion at the foot of the old coat of arms signifies the baronetcy of Nova Scotia.

Chapter 6: Schools in the Helensburgh and District

Chapter 10: Origins of the Street Names

Page 94. Glasgow Street was also for many years the terminus for buses to and from the city.

Page 95. The spelling of Rhu appears to have been changed from Row because of frustration caused by frequent mispronunciation.

Page 100. Replace paragraph on Kent with “Commodore DG Kent was the first commodore of the Clyde Submarine Base.

Page 102, para 2, section on Maclachlan Town Clerks. The son was called John [not Edward] and the grandson Edward [not Ian].

Page 103, After para 2, add. Giffnock Gardens takes its name from the nearby Giffnock House which was so called because it was built out of stone from Giffnock Quarry near Glasgow.

Page 106, para 1. The funnel of the Comet was designed so that sails could be hoisted up it to provide extra power – see the picture on page 208. Steamships continued to use sails for many years.

Page 115, para 3, 2nd last line. The first railway in the area was meant to run from Glasgow to Balloch, but a shortage of funds at the outset meant that for a while it ran only between Bowling and Balloch.

Page 116, para 1, line 4. Helensburgh's original railway station was definitely NOT in George Street; it was on the site of the present railway station and was built in 1856 – two years before the opening of the railway. What was in George Street appears to have been a "railway landing" which was also sometimes known as a "ticket platform". A train headed for Helensburgh would stop at this landing and the passengers' tickets would be collected there. It appears to have opened around 1865-66 and to have closed in 1898, by which time quite a number of passengers were using it as an unofficial station and disembarking there!

Page 116, para 4, line 4. Another reason for the Cowlairs incline was that the owners of the Forth and Clyde Canal saw the railway as a threat and, by refusing to allow the railway company to build a viaduct over the canal, forced it to go underneath in a tunnel.

Page 120, end of para 1. [add] The last of the original electric trains was withdrawn from service at the end of 2002. Three express services ran from Helensburgh to Glasgow every morning; depending on how early they travelled, passengers were classified as striving, arriving or thriving!

Page 121. Roads, end of para 1. Early records suggest that the Highlandman’s Road may even have been part of a pilgrims’ route from Stirling to Iona in the years prior to the Reformation in 1560.

Page 128, end of para 3. The East End Park was also a favoured location for circuses – perhaps the last was held there in 1977. As publicity for the circuses a parade of elephants used to take place through the streets of the town.

Page 140, paragraph 4. Although Helensburgh Football Club was only founded in 1886, football was being played in the town at least 10 years earlier. On 3 October 1874 a Helensburgh team played a friendly against Glasgow Rangers; Rangers won 1-0 despite using only 10 players! A year later on 18th September another friendly was played against Rangers, this time in Glasgow, with the score being a 1-1 draw. The demise of Helensburgh Football Club in 1926 was largely due to the expense of travelling to away games throughout Scotland.

Page 146, last para, end of 5th last line. [add] and the buses had blacked-out windows. An air-raid shelter was even constructed under the West Esplanade, but it naturally filled with water!

Page 147, para 1, end of first sentence. [add] and a bomb demolished a wall at Waverley Avenue in Colgrain.

Chapter 15: Some Architectural Gems and their Architects

Page 179. Greenpark. Although John S Boyd designed the house for his brother-in-law R S McNicol, the partially built house was sold to William and Maud McCaig who became its first occupants.

Page 179. Greenpark. [Replace the last sentence as follows]. The original cut glass panels in the doors were designed by Charles Baillie (1903c 1960) who also designed the interior of the liner Queen Mary including a beautiful, illuminated glass panel in green with a fish motif; unfortunately only one of these panels remains at Greenpark, and it depicts a sun god in Greek style.

Page 183, para 2. The sheltered housing built by the Bield Housing Association is called Birch Cottages and they are situated between 96 and 104 Sinclair Street.

Page 187, para 1. The first railway station was definitely NOT at George Street, but where the present station is. For fuller details see Corrections for page 116, para 1.

Page 192, para 6. The remaining tower of Ardencaple Castle is to be found at the junction of West King Street and Frazer Avenue.

Chapter 18: The Famous and the Infamous

Page 254, para 4, last 2 lines. Madeline Smith’s grave just carries the name Lena Sheehy and it is in Hastings-on-Hudson, New York state, not in New York itself.

Chapter 19: Out of the Past and into the Future

Page 260, 3rd last para. In the days of horse-drawn carriages the wealthier residents of the town did not have to enter shops; instead either the shopkeeper would come out into the street and take their order while they stayed in the carriage, or a servant would be sent into the shop.

Page 267, para 3, 1st sentence. [Replace with] In 1951 the Infectious Diseases Hospital, twenty years older than the Victoria Infirmary, was only five years away from closure, but there was also a third hospital on the periphery of the town at Camis Eskan House.

Page 271, para 2. In Australia it is pronounced Helensburg – without the last “h”!