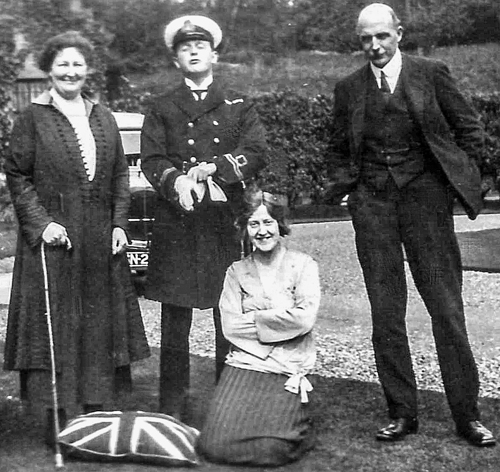 A LEADING Cardross resident for nearly 40 years was one of the owners of the world’s largest private steamship company . . . which is said to have been the inspiration for the popular 'Onedin Line' TV drama series in the 1970s.

Shipowner Claud Allan was a member of the Allan family of Scotland and Canada, founders of the Allan Steamship Line.

In 1908 Claud rented the impressive 21-bedroom Victorian mansion Kilmahew and its extensive grounds, including magnificent gardens, in the village from John William Burns, another shipowner. He bought it eleven years later.

Claud, who was born on March 18 1871 at 2 Park Gardens, Glasgow, was the youngest of seven sons of shipowner Alexander Allan and his wife Jane.

He served as a Private in the Boer War, was at the siege of Mafeking in 1899-1900, was captured and became a prisoner of war, and after he was freed returned home and was awarded the Queen’s South Africa Medal with three clasps.

On June 5 1901, while living at Ballochmyle, Mauchline, he married Glasgow timber merchant’s daughter Ada — known as Adeline — Margaret Mitchell, and they had four children, Charles, Bobby, Marion and Sheena.

In addition to his shipping interests Claud became and remained until his death a member of the Merchants House of Glasgow. In 1907 he also became a director of the British Crown Assurance Corporation Limited.

By the time the First World War broke out he was already a member of the Royal Navy Volunteer Reserve, but in 1915 he transferred to the 9th Glasgow Highland Battalion of the Highland Light Infantry in the rank of Second Lieutenant, later Captain.

While he was serving, Adeline opened a canteen and shop at the Fairfield Shipyard in Govan, and in June 1917 she held a huge garden fete at Kilmahew which raised over £1,000 for the Red Cross.

Two years later some 200 children came to the mansion for a peace celebration.

After the war and as well as his many business interests, Claud was a member of Dunbartonshire County Council and did much charitable and education work. He was a Deputy Lieutenant of the County and became Vice-Lieutenant in 1939.

In 1932 he was appointed convener of the finance and property committee of the Royal Technical College in Glasgow, a post he held until his death. In 1964 the college became the University of Strathclyde.

He was on the committee of the Glasgow Mission to the Outdoor Blind and gave generous cash aid. He served as its president from 1936 until his death in 1944. He was also a trustee of both the James Allan Almshouses and the Orphanage at Whiteinch.

A passionate curler whose rink was frequently made up of members of his household staff, including coachman then chauffeur Andrew Aitken, head gardener Frank Dunbar, and his handyman, Stratton, he was also a major figure in the local yachting community.

He was on the committee of the Mudhook Yacht Club and represented it at the Clyde Yacht Clubs Conference. In 1933 the club set up a cadet centre on the Gareloch to encourage more young yachtsman.

Adeline was active in the Red Cross and the local Woman’s Guild, but her main interest was gardening.

She served as president of the Scottish National Sweet Pea, Rose and Carnation Society, and was an ardent supporter of Helensburgh and Gareloch Horticultural Society.

In 1939 she was both elected a Justice of the Peace and became an officebearer of the British Red Cross Association.

A special occasion at Kilmahew in September 1927 was the wedding of daughter Sheena, who married Dr Peter Wilson, a survivor of the Great War trenches. They met when Sheena was nursing at St Thomas’s Hospital in London.

They had two children, Michael Allan and Fiona Margaret Ann, but later parted. Peter stayed at Radlett in Hertfordshire where he had a rural practice.

Sheena’s marriage was followed in March 1931 by the wedding at the Burns Church in the village’s Station Road, now the Parish Church, of her elder sister Marion to Lieutenant Commander Dennis Wilson Harrison Last, RN Rtd.

Claud’s sons, who both went to the prestigious Harrow School in London, were Charlie, who went on to work for the Imperial Tobacco Company in Bristol, and the more colourful Bobby.

At Harrow Bobby won the Rothschild Scholarship and went up to Clare College, Cambridge, to read history, and from there he won the Mellon Scholarship to study at Yale University in Connecticut and obtain a post-doctoral degree.

Bobby, a first class athlete and cross-country runner, set his heart on a political career, and in December 1938 he was adopted as prospective National Government candidate for the Coatbridge Division of the Unionist Association.

But he did not become an MP for another 13 years because of the Second World War.

In May 1939 he joined the Clyde Division of the RNVR where his father had served with distinction since its formation in 1903.

He spent the first two years of the war with Coastal Forces at Gosport, Hampshire, and in June 1942 was posted to Alexandria in Egypt as commander of a squadron of motor torpedo boats which harassed enemy shipping in the Mediterranean.

The youngest Commander in the RNVR, he won the DSO for his service off the west coast of Italy, the Croix de Guerre in 1943, and the OBE in the 1944 New Year’s Honours List.

He was mentioned in despatches five times, and in 1943 was appointed a Commander of the Legion of Honour.

He fought the 1945 General Election but lost. However in 1951 he became Conservative MP for Paddington South, serving in Parliament for 15 years and under four Prime Ministers. 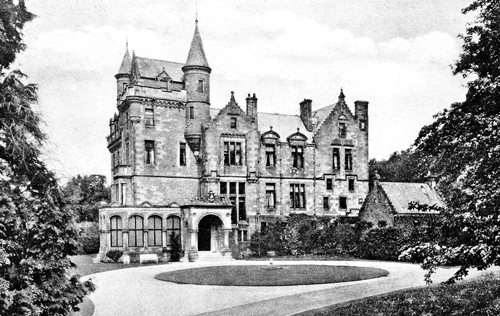 The story is told that the only time the former MTB commander admitted having been scared was when sailing with his friend, former PM Sir Edward Heath.

He also became a prominent London businessman, serving as chairman of Ladybird Books, a director of Pearson and Longman publishers, and a governor of the BBC from 1971-6.

In 1973 he was made a Life Peer and took the title Lord Allan of Kilmahew. He died suddenly on a trip to Australia in 1979.

Sheena became a matron of Braeholm Nursing and Maternity Home in Helensburgh in 1941, and two years later she met and married a naval officer, Commander Jack Parnell Hunt.

The wedding was in Rhu, the reception at Braeholm, and the honeymoon in Luss.

Just a few months later he was posted to Algiers as Captain of the Dockyard.

When German bombers set fire to an ammunition ship in the harbour, Jack bravely set off to tow it out to sea, but it exploded, killing him and many crew members.

Because of death duties the family decided to sell Kilmahew, which had been extensively damaged during the war when a land mine exploded nearby.

It was bought in 1948 by the Roman Catholic Church, which already owned nearby Darleith House, and turned it into a seminary. The now derelict St Peter’s Seminary was opened nearby in 1966.

Adeline spent the rest of her life at Ardardan, where she died in July 1952.

Much of the information contained in this article was uncovered by Maureen Borland for her fourth book, “The Allan Family: they left the world a better place”.

Maureen was born in Sidcup, Kent, moved to Scotland in 1964, and has lived in Ayrshire with her husband and sons for most of her life.

In the late 60s and 70s she worked in advertising, for Charles Barker (Scotland) Limited, and then Struthers Advertising.

She was 79 when the book was launched at Braeholm, now a Royal Sailors Rest, in May 2013, and she said it would be her last book.