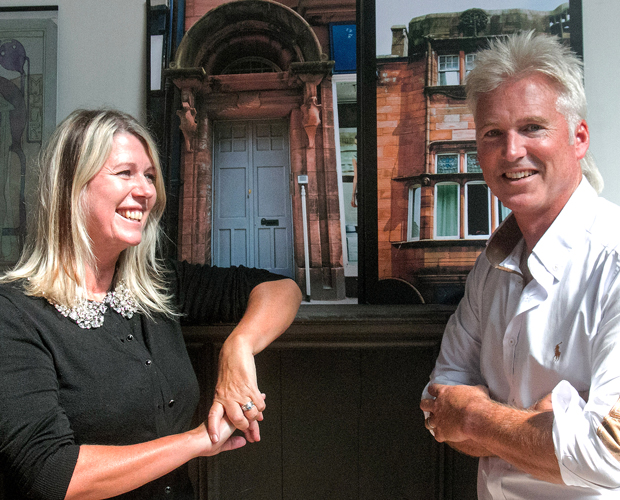 A PERMANENT multi-purpose Helensburgh tribute to famous architect Charles Rennie Mackintosh in time for the 150th anniversary of his birth in 2018 was the dream of a Kilcreggan couple.

Architect Bruce Jamieson and his wife Nicola — former manager of the tourist information office in the Clock Tower on the seafront — bought the top floor of the former Conservative Club above M & Co at 40 Sinclair Street in the summer, having previously tried to buy it four years earlier.

It has always been believed locally that Mackintosh played a leading role in the design of the red sandstone building — which has a shallow undulating facade of finely worked masonry with crisply detailed carvings — while working for the architectural partnership of John Honeyman and Keppie, and Bruce is certain of it.

Built on the site of a former warehouse and officially opened in December 1895 as a clubhouse for the Helensburgh and Gareloch Conservative Club, it originally had two shops on the ground floor to generate revenue.

The first floor was occupied by a reading and smoking room and a large hall for public meetings. The attic storey housed the billiard room and the caretaker’s offices.

Today there is one shop on the ground floor, and the first floor is a flat. The top floor consists of the bright and airy gallery formerly used as the billiard room and later as an engineering office, but disused and uncared for since the 1970s, and two smaller rooms.

Bruce also believes that elements of the design were incorporated in Mackintosh’s most famous creation, the Glasgow School of Art. 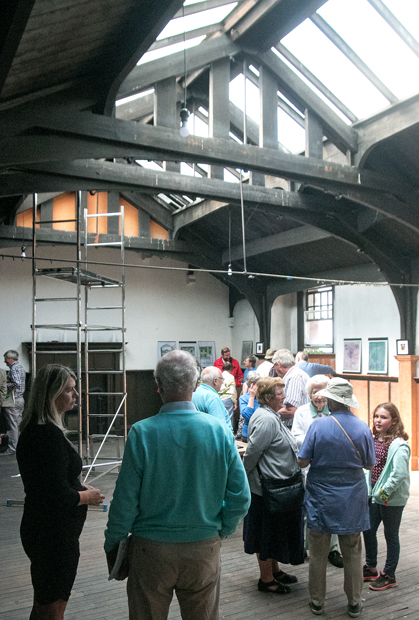 Glasgow University’s Mackintosh Architecture website states: “Details, such as the carving around the ground-floor entrance to the club rooms and the unusual treatment of the right-hand bay, have parallels in other works of around the same date, such as the Music Room at Craigie Hall and the first phase of Glasgow School of Art, where Mackintosh’s authorship is more certain.

“Corroboratory evidence is provided by Ronald Harrison, an early student of Mackintosh’s architecture in the 1930s, who had access to the office records.

“He included the Conservative Club on lists he compiled of works he believed were by Mackintosh, and of drawings produced in the office during Mackintosh’s time.”

The top floor provides a studio for Bruce’s architectural practice, Pure Green Space, and is open to the public. The Charles Rennie Mackintosh Society has visited, as did members of Helensburgh Heritage Trust and other interested groups.

The Mackintosh Society website states that the late 1890s saw Glasgow’s reputation in architecture and the decorative arts reach an all-time high.

It continues: “At the very heart of this success was a talented young architect and designer, Charles Rennie Mackintosh, whose reputation was to spread quickly beyond his native city and who, over a century later, is still regarded as the father of Glasgow Style.”

Born in Glasgow on June 7 1868, Mackintosh was apprenticed to a local architect, John Hutchison, but in 1889 he transferred to the larger, more established city practice of Honeyman and Keppie.

He became a member of a group known as ‘The Four’ with James Herbert McNair and sisters Margaret and Frances Macdonald, who met as young students at Glasgow School of Art in the early 1890s.

Mackintosh and McNair were close friends and fellow apprentice architects in Honeyman and Keppie, and the sisters were day students at Glasgow School of Art.

They formed an informal creative alliance which produced innovative and at times controversial graphics and decorative art designs which made an important contribution to the development and recognition of a distinctive ‘Glasgow Style’.

In 1899 McNair and Frances Macdonald married and moved to Liverpool. Mackintosh and Margaret Macdonald married the following year, remaining in Glasgow till 1914. Both weddings were in the Episcopal Church in Dumbarton.

Bruce Jamieson said: “We wanted to buy it for six years, and since we bought it we have named it the Mackintosh Club and there has been a lot of interest in what we are doing.

“There is a lot of work to be done to restore the gallery fully, so we are embarking on a two-year programme to make this into what it should be, so that people can come and visit it. 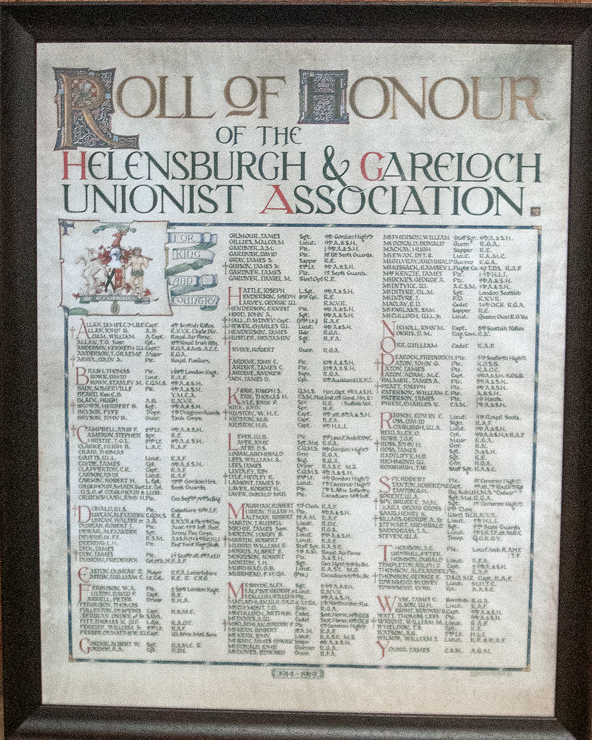 “We did a lot of research into it and realised it was an important building, but it has been completely neglected. I don’t understand how it is possible for buildings to be left unheated and basically uncared for over such a long period of time.

“We will restore it for Helensburgh, and as a companion to Mackintosh’s Hill House in Upper Colquhoun Street. We want to paint a picture of Mackintosh at this time when the building was designed in 1894 — although most of his work was probably done in 1893.

“Mackintosh was a young architect. For him and the rest of the Four, this is a melting pot of ideas, collaborations, creativity that really set the path for him for the future.

“The Glasgow artists of the time were all fascinated by the new symbolism. That group was distilling down to four about 1983-4. The Four were now pioneering and creating what we all know now as the Glasgow Style.

“The Four had already exhibited and caused a bit of a stir. People were already calling them the Immortals or the Spook School. There are four heads on the front of the building, so it could be that they are representative of the Four.

“Today we all think of Mackintosh and we love Hill House, for instance, which is probably one of the pinnacles of his design career because it is such a perfect entity, the whole building.

“This time leading up to the School of Art being designed is a fascinating time in Mackintosh’s life.”

The copies of the Dean of Guild Court drawings have writing from three different people, but most is in Mackintosh’s hand which shows that he had a senior role in the design.

As in the Art School, the design managed to channel natural light down in to the area of the ground floor shops.

Bruce said: “This gallery is an attic space, but the light we are getting in here is incredible. Mackintosh is really thinking about the way the light works — and in the School of Art he used exactly the same method.

“He could well have brought Art School headmaster Francis Newberry down here when the design competition was announced and said he could do something a bit like this at the School of Art.”

Bruce points to the contrast with the hall downstairs where the panelling is all white. This was because women came to meetings, whereas the billiard room was for men with cigars and was dark and masculine — symbolic to Mackintosh of different realms.

Looking to the future, the couple want to restore the gallery as a museum.

Nicola said: “We plan to install a kitchen, and we could see the billiard room being used for meetings, wedding receptions or dinners. So far this has all been paid for by us, but obviously we will be hoping to obtain grants in the future.”

Bruce added: “We would like to feature the work of the Four and for the Mackintosh Club to be a positive celebration of when they all met at the Art School, and the creativity which started the Glasgow style.” 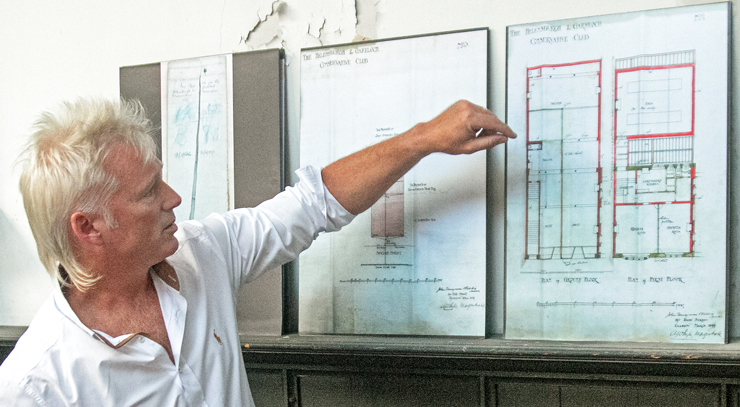