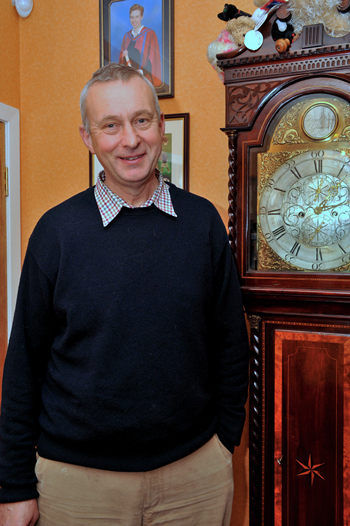 But while the Rev John Cairns Christie may have accepted a job which lasts for just six days the duties attached to it will go on for a full year until the next incumbent takes over the role.

Mr Christie, who lives in Cumberland Avenue, was the Moderator of the Church of Scotland and became for a year one of the world's highest profile churchmen.

At over six feet tall 62 year-old Mr Christie is a man of stature, not just in the church, but he is a man who remains firmly grounded and is just as likely to be found playing a game of five-a-side football with his pals at Glasgow's Hyndland Secondary School, where he was chaplain for some years, as leading a high-powered debate in an exalted chamber.

Mr Christie serves as convener of the Church of Scotland's Safeguarding Committee which has as its main concern the protection of children and now vulnerable adults, and these issues formed a major part of his concerns as Moderator.

He, however, was unable to express personal views as Moderator, when he always had to reflect the views and decisions of the General Assembly which is the supreme court of the Church of Scotland.

The General Assembly has the authority to make laws determining how the Church of Scotland operates. It also is the highest court of the Church — the other courts being the Kirk Session and the Presbytery — in which cases can be heard in matters of litigation.

Mr Christie had no ministerial duties while he was Moderator to free his calendar for the travel and meetings he had to fit in to what was a very busy year, but he continued his duties in the Interim Ministry a role he is dedicated to and obviously loves.

He said: "The Interim Ministry is time limited to the completion of a particular task. I see the role as to assist congregations over particular hurdles whatever those may be, and I see it as a creative task and not just as a troubleshooting exercise."

Mr Christie has been in the Interim Ministry for some 15 years and is currently serving as the interim minister of St Andrew's Church, West Kilbride, and the Scots Kirk in Lausanne,

Prior to taking over the Interim role Mr Christie served for 14 years as minister at Hyndland Parish Church where his ministry included school chaplaincies in Hyndland Secondary School, Broomlea School, which caters for children with profound learning difficulties, and Middlefield School for children with communication difficulties.

Mr Christie developed community links and worked to meet the needs of the local community, providing pastoral care for all who sought it. He actively encouraged ecumenical awareness and interfaith dialogue, and was active in Christian Aid.

He said: "I really enjoyed my years at Hyndland and have kept contact with many friends there. But I got to an age when I realised that I was comfortable in my role at Hyndland and the Gospel is meant to be comforting, not comfortable.

"I didn't want to go to another parish but wanted to use my skills learned over my years at Hyndland to help other congregations, so I decided to join the Interim Ministry."

Since then Mr Christie has worked with congregations in places as diverse as Cumnock, Kilmacolm, Arisaig, Lochaber, Rum and Muck, as well of course as Lausanne and West Kilbride.

This quietly steadfast man of the kirk was not originally destined for the Ministry.

His father was an accountant with the Clydesdale Bank, serving many years at the James Street branch in Helensburgh as well as in the Vale of Leven and Greenock, and Mr Christie went to school in Helensburgh from the end of Primary 2 until the end of sixth year at Hermitage School.

From 1966 to 1968, Mr Christie was employed as a scientific assistant in the Royal Ordnance Factory at Bishopton. He then studied at the University of Strathclyde, graduating Bachelor of Science in Biology in 1971 and, for a year, was Assistant Warden at Compass Christian Centre, Glenshee Lodge.

Then came a year's study at Jordanhill College, Glasgow, from where Mr Christie graduated with a Postgraduate Certificate in Secondary Education. From 1973-76, he taught biology and chemistry at Albert Secondary School, Springburn, while also undertaking part time study at Paisley College of Technology to become a member of the Institute of Biology (now the Society of Biology). He is a Chartered Biologist.

In 1976, still at Albert Secondary School, Mr Christie became assistant principal guidance teacher and remained in that post until 1978 when he was appointed principal teacher of science at Tiree High School. During this time, he was ordained to the eldership in Tiree Parish Church.

He moved to Inverness Royal Academy in 1984 where the responsibility element associated with the teaching post that he held was Warden of Dalneigh Hall of Residence for highlands and islands students attending the then Inverness Technical College.

He said that in 1985 he began to feel that he was getting a call to the Ministry and thought that he might become an auxiliary minister. However, he was told that there was not really a need for auxiliary ministers in Inverness because there were plenty of retired ministers to fill any gaps — and if he felt the call to the ministry he would "have to go all the way".

He applied for selection and was accepted, and as a result studied at Glasgow University, graduating Bachelor of Divinity with Upper Second Class Honours in New Testament and Systematic Theology in 1989. He served for one year as Probationer Assistant in Mosspark Parish Church, Glasgow, and in  1990 was ordained and inducted into Hyndland Parish Church.

He came back to live in Helensburgh in 2004 with his second wife Annette whom he met when they both suffered the loss of a spouse. Mr Christie's first wife Elizabeth died when their daughter Margaret was just 17 years-old and that loss, he says, emphasised for him that "there are far worse things than a fight in a kirk".

He said: "The move back to Helensburgh was not really planned. As a minister you live in a manse, and Annette and I were looking around for a holiday house or maybe even a house for our retirement somewhere in the West of Scotland.

"I was visiting someone in Argyll Lodge and Annette came to Helensburgh with me and suggested that we have a look for a house in the burgh. An old couple who were selling their house liked us and we liked them, and when I said that I really liked the garden the old gentlemen said that he wanted someone who would care for the garden to have the house, and it all fell into place."

Mrs Christie is a leading international bowler who has been capped for Scotland 60 times and has represented her country at two Commonwealth Games and at the World Championships. She coaches the Scotland under 25 international side but took a year out from her duties to be with her husband during his year as Moderator.

Mr Christie lists his leisure interests as watching Annette play bowls, playing five-a-side football, which he claims to do badly, hill-walking, reading, radio and TV, occasional golf, sailing, DIY and gardening, and he is Chaplain to the Mudhook Yacht Club which organises races for school sailing teams.

The role of Moderator is an honorary one, and during the annual General Assembly the role of the Moderator is to chair the meetings, lead daily worship, keep order, rule on points of order, and sign documents on behalf of the Assembly.

After the Assembly, the Moderator spends much of the rest of his or her time in office travelling as a Church representative in Scotland, other parts of the UK, Ireland and overseas in an ambassadorial capacity.

Every Moderator carries out a series of visits to several Church of Scotland presbyteries, as well as undertaking a number of international tours. The duties also include visits to the Scottish Parliament and to 10 Downing Street.