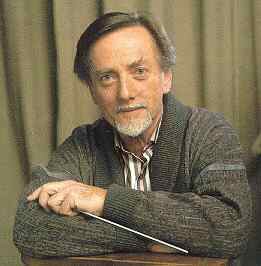 Fifty years earlier, in the Victoria Halls on the evening of Tuesday 18 March 1958, the orchestra made its first public appearance. The programme that night included Grieg’s ‘Norwegian Dances’ as it did again at the golden jubilee concert.

The orchestra was originally formed in 1957 as an adult evening class under the direction of the young conductor, Bryden Thomson (pictured), who was later to gain an international reputation with the BBC Scottish and other orchestras in Britain and abroad.

Thomson did not conduct the first concert as he had gained a post in Canada, and that role fell to Gerald Dingley who was succeeded by another outstanding musician, J.Mouland Begbie, then Leader of the BBC Scottish Orchestra.

The impetus which created the orchestra was very much home-grown in Helensburgh.

As well as playing for the Operatic Society, Bunny and Rosemary — the original members still with the Orchestra — had been travelling to Glasgow to play with the Glasgow Amateur Orchestra, but found the journey rather inconvenient and suggested to the others that they form a local group.

Since the days of its formation, the Helensburgh Orchestra has grown considerably and its ambitions have been expressed in repertoire and in many other ways.

In 1987 and 1989 it organised and presented the Young Scottish Composers Competition in association with the Royal Scottish Academy of Music and Drama, the Scottish Arts Council, and BP.

In 2002, it commissioned John Maxwell Geddes to compose and conduct his celebration of Helensburgh’s bicentenary, ‘The Hill House’.

The orchestra’s biggest adventure to date happened in 2001 when it made the journey to Thouars, Helensburgh’s twin town in France, for a concert in the Eglise Saint Medard on April 20.

Perhaps almost as important as the orchestra’s own musical achievements, are its other contributions to Helensburgh’s life, not least by being largely responsible for the creation of the Helensburgh’s other orchestra, The Saturday Orchestra (now Lomond and Clyde Community Orchestra).

For the golden jubilee conceret Robert Baxter conducted an ambitious programme including Sibelius’ Second Symphony and a Mozart Flute Concerto with the soloist Helena Gourd following in the orchestra’s tradition of promoting young local musicians.

Another tradition was observed in the inclusion of a new work, ‘Thyme’, by Mike Norris, a long-time friend of the orchestra.

So, what are the prospects for the next 50 years?

Certainly the orchestra is now as strong as it has ever been, even in sections traditionally difficult to fill such as violas and bassoons, so there seems no reason to doubt that it will continue to provide opportunity and pleasure for members and audiences for a long time to come.