AN American Boeing B29 Superfortress crashed in Succoth Glen, Argyll, in January 1949, killing all 20 people on board.

The plane came down in bad weather, and to this day a large amount of wreckage still remains. The site is marked with a memorial cairn.

The B-29, 44-62276, was one of the 301st Bombardment Group which was part of the 15th United States Air Force, and had been involved in the post-war Berlin airlift.

It left RAF Scampton in Lincolnshire on the morning of January 17 for a return trip to its home airfield at Smoky Hill Air Force Base in Salina, Kansas.

The aircraft was accompanied by a 2nd B-29 also returning to Smoky Hill, and it was a very cold morning as the airmen boarded the two aircraft. Their planned route was over Scotland to Keflavik in Iceland where there would be a short stop for supplies and refuelling.

Conditions across the British Isles were varied, with a lot of scattered cloud, but even worse was that freezing temperatures would cause heavy icing on the wings and make control surfaces he 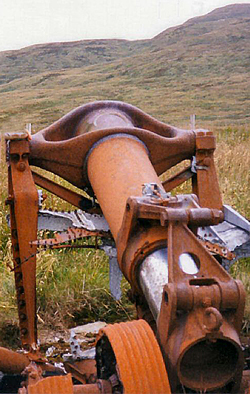 Both aircraft began to experience problems with icing while over Scotland. Captain Donald E.Riggs, pilot of the other B-29, decided that conditions were too bad and made a turn to head back to Scampton.

It is not certain what happened next, but the B-29 piloted by 1/Lieutenant Sheldon C.Craigmyle, who had requested permission to climb from 10,500 to 14,500 feet, clipped the summit of Beinn Tharsuinn and crashed into a hillside at Succoth Glen near Lochgoilhead at 9.50am and burst into flames.

The inquiry into the crash was unable to determine the exact cause, but adverse weather and heavy icing was believed to be a contributory factor, if not the sole cause. Pictured left is part of the undercarriage.

On January 17 2009, sixty years later, a small memento prepared by the pilot’s widow, 87 year-old Allene Craigmyle, was placed at the scene of the crash.

It read: “My Darling Shel, I pray to God with all my heart for yesterday and you, making way for the will of God of which I will never understand. So today I honour you and all those who left with you.

“I say ‘Thank You’ for your ultimate sacrifice on behalf of the families of your crew and our country. Till we meet gain. Your Loving Wife, Allene.”

The B-29 was developed as a long-range heavy bomber in World War Two and was equipped with guns that could be fired by remote control. They were used primarily in the Pacific arena, although some operated over the Atlantic.

During the war in the Pacific, B-29s were used over Japan. In August 1945, the B-29 Enola Gay dropped the first atomic bomb used in warfare.

This was followed three days later by the B-29 Bockscar dropping a second nuclear bomb.

After the war, the B-29 became the main bomber aircraft used by the newly formed USAF Strategic Air Command and was used extensively in the Korean War.

An appeal has been made to anyone in possession of wreckage parts — large or small — from the crash site to make them available for return to their original location.

Keith Beckett, who owns the picture (above) of the aircraft taken on April 14 1948 at Goose Bay, Labrador, said: “If you can provide a photo of a part or parts from this aircraft, together with an address for collection of any parts, please contact me on This email address is being protected from spambots. You need JavaScript enabled to view it..”