A HELENSBURGH-born actress has become a well known TV, film and theatre performer.

Morven Christie was born in 1979, but only lived locally for a few months until her family moved to Glasgow.

After leaving drama school in 2004, Morven, who is 5ft 3 ins tall with light brown hair and hazel eyes, was soon in demand on stage and screen, recently playing Jane Bennett in ITV1’s critically-acclaimed ‘Lost in Austen’ and Rose in ‘Oliver Twist’ for the BBC.

Among her stage work are the leading roles of Juliet in ‘Romeo and Juliet’ and Hero in ‘Much Ado About Nothing’ for the Royal Shakespeare Company in 2006-7, in which she received rave reviews for both her portrayals.

Early in 2009 she starred at London’s Old Vic Theatre in the final leg of the Bridge Project, a ten-month tour of Tom Stoppard’s new adaptation of ‘The Cherry Orchard’ and ‘A Winter’s Tale’, directed by Oscar-winner Sam Mendes and co-starring Ethan Hawke, Simon Russell Beale and Rebecca Hall.

Says Morven: “We opened in New York and then did a world tour, and London was the final stop. It’s been an amazing experience, to be paid to see the world! I’ve seen some phenomenal sights and on all my days off I was doing something extraordinary.

“And of course it was fantastic to work with Simon Russell Beale — who I think is just the greatest classical actor alive — and Sam Mendes. It was brilliant to be part of his UK homecoming.

“The things you learn on a project like this are on a completely different level to other experiences. But theatre can be quite hard work and very pressurised, so it’s lovely to be back home, and a little holiday would be nice!”

The actress lived in Helensburgh for only the first few months of her life, but spent her childhood in Scotland, splitting her time between Glasgow and Aviemore. She travelled and worked in a series of jobs including as a ski instructor at Glasgow Ski Centre, before choosing to study production at Edinburgh's Telford College.

However she realised she wanted to act, and studied at the Central St Martin’s Drama Centre in London, graduating in 2003.

Her film debut was in ‘House of 9’ with Dennis Hopper and Susie Amy, the story of nine strangers, with no apparent connection between them, being abducted, drugged, kidnapped and sealed in a house together.

She also appeared in ‘The Flying Scotsman’ with Johnny Lee Miller, which told the story of inspirational Ayrshire cyclist Graham Obree who broke the world one-hour record in 1993 on a bike he designed. 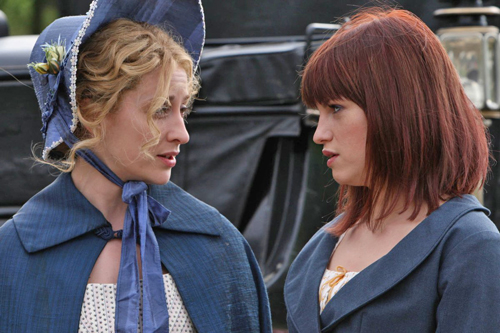 She played the supporting lead role of Watson in the highly anticipated film ‘The Young Victoria’, which tells of the turbulent early years in the life of Queen Victoria and stars Emily Blunt. She is pictured (left) with Jemima Roper in a scene from the film.

In 2009 she appeared in a successful ITV comedy drama series ‘Monday Monday’. However the series was not shown by Scottish Television.

The seven part comedy drama series, created by new writing team Ben Edwards and Rachael New, was set in the head office of a struggling supermarket chain and was about a group of workers forced to relocate to a new city.

The cast included Fay Ripley and Jenny Agutter, and — said the publicity blurb for the series — “with their friends and family left far behind, they’ll be in each other’s pockets (and beds) like never before.”

Morven said: “Sally is very good at her job and happy where she is for the moment. Christine is completely ineffective so Sally gets to do the whole job but not deal with the public face of that, which suits her well.”

In October 2009 Morven was in South Africa finishing filming in Alan Bleasdale's 'The Sinking of the Laconia', a highly-rated two-part drama shown on BBC2 early in 2010.

The RMS Laconia was sunk by a German U-boat on September 12 1942. The commander of the German submarine then undertook a daring rescue after he realised the ocean liner had been carrying a large number of civilians and Italian prisoners of war.

But the mission — against the orders of Nazi high command — took a tragic turn when the U-boat was attacked by a US bomber. The episode changed the course of maritime warfare forever.

On October 26 2010 she opened in the National Theatre production of Ena Lamont Stewart's 'Men Should Weep", described as a moving and funny portrayal of impoverished 1930s Glasgow, a raw salute to the human spirit, at the Lyttelton Theatre on London's South Bank. ran into January 2011 and starred among others comic actress Karen Dunlop.

But sniping neighbours, the flight of daughter Jenny, and the unexpected return to their overcrowded quarters of Maggie’s son and his sexually restless wife Isa — played by Morven — erodes her spirit. And then, just as temporary employment for beloved husband John affords a decent Christmas, wayward Jenny returns with new-found wealth, offering them the chance of escape and one big moral dilemma.

Morven also appears regularly on radio, and in July 2011 she was highly praised for her work in the Radio Four afternoon play 'Whenever I Get Blown Up I Think of You', broadcast to mark the sixth anniversary of the London bombings.

Guardian critic Elisabeth Mahoney wrote: "Molly Naylor's play, based on her experience of surviving the Aldgate bomb, was just the thing with which to greet the anniversary: a brave, funny, tough and beautiful piece of writing.

"What she articulates so well — and Morven Christie, as Molly, captured in her performance — is the intensity of moving to a big city for the first time, and the hugeness of every day.

"The bombing, though it changes her life, is simply one part  of that, told in the same poetic, observational style with which she recounts more ordinary aspects of city life. Arriving from Cornwall, Molly's smiles are lost on the stony-faced Londoners. 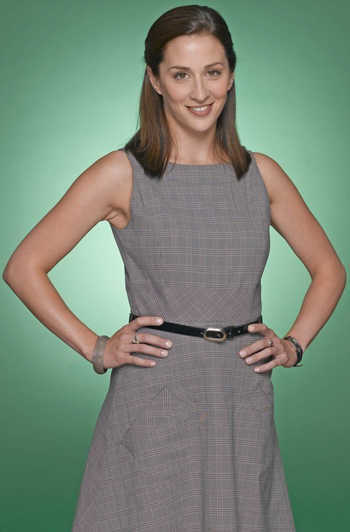 "Her description of the bombing is powerful but full of personality as she recalls trying to break out of the tube carriage and failing. 'We're like rubbish superheroes,' she notes."

In November 2011 it was announced that Morven was playing a main part in the new BBC TV spy drama 'Nemesis', being made by the team who made the very popular 'Spooks'. The eight part series is also an international espionage drama, and is being filmed on location in Scotland, London and Morocco.

In 2012 she was in the cast of the second and third series of the BBC Two weekly comedy series set against the backdrop of the Olympic Games, 'Twenty Twelve', playing the head of legacy at the Games organisers in the spoof documentary.

Morven told the Sunday Mail: “I’m not a fan of comedy in general, but I love this kind of stuff. It’s more believable than a lot of sitcom stuff. We have got used to slightly disingenuous TV, like Friends, which was great for its time but people get bored of that kind of thing after 10 years.

“But in our show, situations are painfully real. John Morton doesn’t necessarily write comedic lines, he writes very believable lines and that’s why they are so funny. It’s normal people in extreme situations and that is fascinating. You absolutely believe these characters are real.”

She joined award-winning Australian actress Melissa George for the BBC/Cinemax production Hunted, a big budget spy thriller which began on BBC1 in October 2012, and completed an independent Scottish film, Shell, written and directed by Scott Graham, about a family who run a small petrol station in the Highlands.

Lilting followed the story of a Chinese mother who is mourning the sudden death of her son. However, stranded without him and not able to speak English, she requires the help of his boyfriend, whom she only knows as his flatmate.

FilmLondon's low-budget project Microwave funded the project along with BBC Films, with backing from Stink Films and SUMS Film and Media Ltd.

In April 2015 the National Theatre of Scotland announced that Morven would play the central role of Lise in their production of The Driver's Seat, adapted and directed by Laurie Sansom from the novel by Muriel Spark, at the Lyceum in Edinburgh from June 13-27 and the Tramway in Glasgow from July 2-4.

A spokesman said: "Morven is an acclaimed actress on stage and screen, known for her roles in BBC’s TwentyTwelve, ITV’s Grantchester and the film Young Victoria. She previously appeared in Blabbermouth and Glasgow Scrapbook for the National Theatre of Scotland."

In recent years was the central figure in the BBC drama 'The Bay' but left after completing two series.