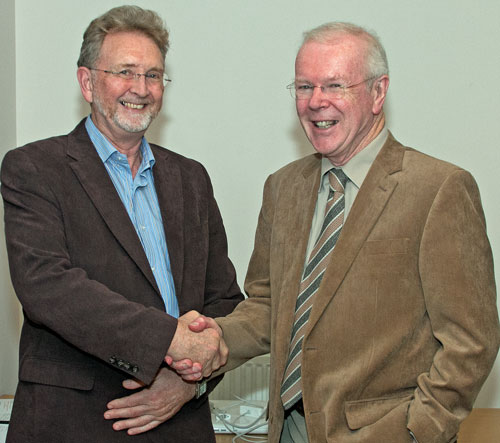 HIGHLIGHTS from the story of the world-famous McGruer of Clynder boatbuilding business fascinated members of Helensburgh Heritage Trust at their October 2015 meeting in Helensburgh Tennis Club.

The guest speaker was the firm’s principal surveyor, Fraser Noble, whose lavishly illustrated talk was entitled ‘My family has been building boats since the 11th Century’.

He said that McGruers came to Britain with William the Conqueror, were granted lands in Scotland by the Normans around Inverness, and became the standard bearers for the Fraser clan.

A cousin of his has found references in Inverness Library to a McGruer building a wooden warship for a French nobleman in the year 1296, and by the late 1800s Ewing and George McGruer had established a boat business at Rutherglen.

Next they moved to Tighnabruaich, then came to Barremman, Clynder, in 1910.

Fraser said: “I grew up in our family boatyard. We employed all trades, and at one time we had 90 employees.

“The books show that we have built over 700 bigger boats, with dinghies taking the total to 1,000.

“It has been an interesting profession to be in, and through it I have met all sorts of rich and fascinating people.”

Fraser said that his great uncle, Ewing McGruer, OBE, was the first of the family to design boats — and other wooden objects, including hollow ice axe handles used on the Everest expeditions of 1924 and 1933, and rugby goalposts for Twickenham.

The McGruer Hollow Spar Company made rolled hollow spars for the wing struts of British fighter planes during World War One and for the struts and fuselage booms of later bombers.

Alcock and Brown made the first transatlantic flight in 1919 in a Vickers Vimy with McGruer struts, and King George V’s yacht Britannia had a McGruer rolled hollow boom 84 feet long and 17 inches in diameter with a 3 inch wall thickness.

The heyday of McGruer boatbuilding spanned from the 1920s to 1990s in the yards at Clynder and Rosneath, with classics such as ‘Al Malika’ for the Sultan of Zanzibar, the Gareloch One Design Class, launches for the Royal Yacht Britannia, and eight metre cruisers and racing yachts.

During both world wars production was given over to military craft, including the 110 foot HAM class minesweepers and the high speed 72 foot MLs — which were delivered at a rate of one every six weeks.

In the 1990s McGruer & Co established the largest Lloyds-approved glass reinforced plastic mould shop in Scotland, laying up hulls from 5 to 20 metres in single skin.

Alongside this work the company operated a 200 tons slipway servicing local ferries, fishing boats and MoD vessels, and built workboats in steel and aluminium.

In 1998 a Technical Services division was opened with George McGruer and Fraser Noble in the key roles.

In 2000 they sold their Rosneath boatyard for development in order to focus on survey and consultancy business.

Fraser also told how one McGruer family lived in a house built over a burn near the Clynder yard.

”You could lift a panel in the kitchen floor, and underneath was a metal bath,” he said. “When you finished your bath you pulled out the plug — and the bath emptied into the burn!”

He was both introduced and thanked afterwards by Trust chairman Stewart Noble (no relation).