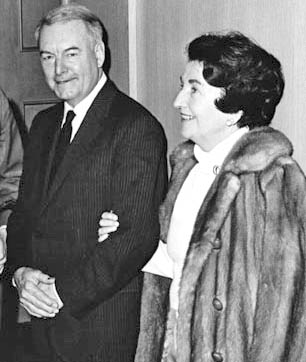 THE author of 21 spy novels, which have sold more than 23 million copies in the United States alone and been translated into over 22 languages, is one of the most famous former pupils of Helensburgh’s Hermitage School.

But Helen Clark MacInnes, who was born in Glasgow on October 7 1907, only came to the burgh when she was five with her parents, Donald and Jessica McDiarmid MacInnes.

After attending Hermitage in East Argyle Street, she became a pupil at the High School for Girls in Glasgow, then studied at Glasgow University and emerged in 1928 with an MA in French and geography.

While a student at Gilmorehill she met her future husband, Gilbert Highet (they are pictured right).

She went on to study at University College in London and gained a Diploma in Librarianship in 1931, and on September 22 the following year she married Gilbert.

For the next five years she was special cataloguer for the Ferguson Collection at the University of Glasgow — some 7,500 volumes from the library of John Ferguson (1838-1916), bibliographer and Regius Professor of Chemistry at Glasgow University, mainly on alchemy, chemistry, the occult, witchcraft and free masonry — and helped Dunbartonshire County Council education department select books for county libraries.

In her spare time she acted with the Oxford University Dramatic Society and the Oxford Experimental Theatre.

Helen also played tennis, went to concerts, and read avidly, particularly in palaeography, which is the study of ancient handwriting, and the history of the English novel. This grounding in the arts, especially her love of music and concerts, can often be seen in the backgrounds and conversations of her characters.

In 1937 her husband accepted an invitation to teach at New York’s Columbia University, and the couple made a permanent move to the United States. In 1951 she became a naturalised US citizen, and the couple divided their time between New York and East Hampton until Gilbert died in 1978.

After moving to New York Helen was inspired by events around her, and with her husband's support she began writing seriously — and continued to do so until her death at the age of 77 on September 30 1985.

She and her husband visited most of the places she wrote about, he for his research, she for her stories, but they went most often to the Dolomites, to the Salzburg Festival, and to Vienna. In 1966 she received the Columbia Prize in Literature from Iona College, New Rochelle, New York.

She is perhaps best known and most highly praised for her exotic, romantic settings — usually in Europe. Critics have called them "classic travelogues" with the added spice of romance, adventure, and espionage.

Her extensive travel throughout Europe, combined with careful research into the historical, cultural, political, religious, and geographic nature of an area, provided her novels with a detailed, accurate sense of place that lends her stories an integrity and an interest independent of plot, whether the background be Switzerland or Granada, Brittany or Venice, Vienna or the American Southwest.

Strongly influenced by the writing of the author of 1984, George Orwell, her personal observations of events during the 1930s and 1940s, common sense, and intimate contact with a World War Two British intelligence officer — her husband Gilbert — provided her with a special insight into the nature and realities of Nazi tyranny and espionage.

It was Gilbert who, after reading her notebook analyses and predictions based on newspaper stories of Nazi activities, encouraged her to attempt her first novel, Above Suspicion in 1941.

His interest in the classics led the following year to her two-act play, Home Is the Hunter, a comedy about Ulysses returning from the Trojan War, but it was her interest in the conflict between the quiet homebody and the aggressive invader he must oust that gave it its focus as a portrayal of what an ancient resistance movement might be like. 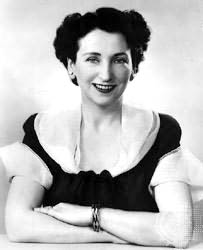 Helen (left) has been called the ‘queen’ or ‘the doyenne’ of international suspense, ‘a grand old professional’, and ‘one of the most topical of all spy novelists’.

Her novels are riveting, lively, informative, literate, and entertaining, and she ranks among the most successful of modern women writers and made the best-seller lists with every novel.

She once explained her work — which won her the 1966 Columba prize for literature from Iona College, New Rochelle in New York — by saying: "A peaceful country needs a good intelligence service. Freedom will not survive unless we know the nature of the attack on it. That is what my books are all about."

Four of her novels have been made into films, and she is also credited with a popular quotation (from Assignment in Brittany): "He who expects the worst won't be disappointed."

Her other spy novels were While We Still Live, Horizon, Neither Five Nor Three, I and My True Love, Pray for a Brave Heart, North from Rome, Decision at Delphi, The Venetian Affair, The Double Image, The Salzburg Connection, Message from Malaga, Snare of the Hunter, Agent in Place, Prelude to Terror, The Hidden Target, and Cloak of Darkness. She also wrote two other novels.