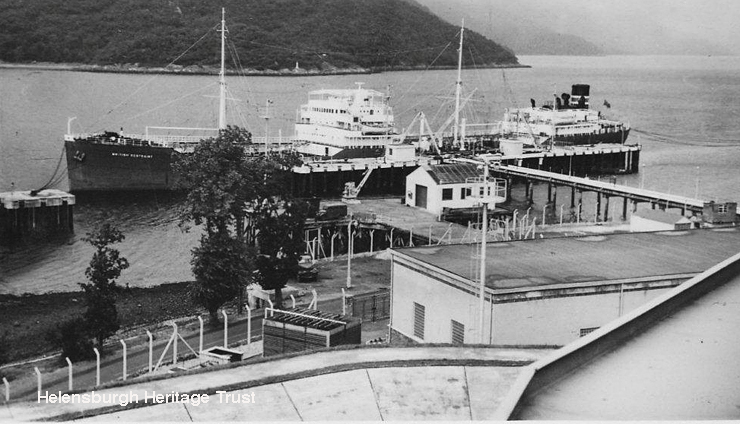 FINNART Ocean Terminal is a petrochemical transfer facility on the eastern shore of Loch Long, about two miles north of Garelochhead.

Also known as Finnart Oil Terminal, it is made up of a series of piers which extend into the loch, with a deep berth able to accept tankers of up to 324,000 tonnes.

It has a ‘tank farm’ which extends from the piers into the hillside to the east, and straddles the A814 road which cuts through the site, separating some of the giant tanks from the main facility.

The terminal was built during the Second World War by the United States Navy and was created by the same team of engineers that built the American base at Rosneath — which they were secretly employed on before the United States was officially involved in the war.

During the war, Scotland’s main oil refinery was at Grangemouth, within range of the Luftwaffe, and Finnart was chosen for the terminal because it offered a sheltered deep water site behind the Clyde boom defences.

Oil was transported to the terminal through a pipeline which was constructed to the Mountblow fuel depot near Old Kilpatrick, and on to the refinery at Grangemouth. A spur was added to connect the Rosneath Naval Base to the pipeline.

After the war, the Finnart terminal became part of the British Petroleum Oil Company.

In 1954 BP connected the terminal to the Grangemouth refinery by a direct 58-mile pipeline, to allow the import of crudes via the deep-water jetty, which supported the use of larger oil tankers.

Later a second line was also installed to allow the direct supply of finished refinery products to the terminal, primarily for export to markets in Northern Ireland.

The terminal was used extensively prior to the discovery of North Sea Oil, after which usage dropped off.

The site has been redeveloped several times in order to take account of increasing oil tanker dimensions, and has always been able to accommodate the largest size in use at any given time.

A wide assortment of tankers can be seen in the Clyde bound to or from the terminal. This trade gives welcome work to Clyde tug boats, of which there are usually three to assist with berthing. One of the tugs must be for standby as a fire tug, a precaution set in law.

The terminal was purchased by INEOS in December 2005 as part of its acquisition of a number of BP chemical assets, which included the Grangemouth Refinery.

INEOS is one of the world’s largest chemical companies and a leading manufacturer of petrochemicals, speciality chemicals, and refined oil products.

At the end of 2010 it operated 15 businesses in 13 countries, and produced more than 40 million tonnes of petrochemicals and 20 million tonnes per annum of refined oil products (fuels).

INEOS employs 15,000 highly skilled people and has annual sales of around $40 billion.

A spokesman said: “INEOS recognises the importance of the Finnart Ocean Terminal to its operations at Grangemouth, and health, safety and the environment will always remain an integral part of these operations.

“The Finnart site has seen significant investments since the acquisition by INEOS to ensure its long-term future. Together with ensuring these standards of health and safety are maintained, the investment in the site has seen the upgrading and refurbishing of the assets at Finnart.

“At the terminal there are 29 INEOS employees with up to 150 support staff and contractors.”

The site, which is leased from the Ministry of Defence, includes both Finnart House and Arddarroch House, each of which once served the adjoining estates of the same names. Once well known for their horticulture, the gardens associated with both houses have been lost. 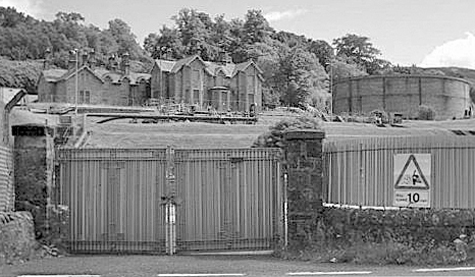 Finnart House (right), attributed to William Burn, was built around 1832 for shipbuilder John MacGregor, and lies to the west of the A814, abandoned and boarded up.

Edward was born in Greenock, and educated at Glasgow and Oxford Universities, where he became Fellow and Tutor of Merton College. In 1866 he was appointed to the Chair of Moral Philosophy at Glasgow, which he held until 1893, when he became Master of Balliol College, from which he retired in 1907.

The house was converted into an hotel prior to the outbreak of World War Two, when it was requisitioned by the United States Navy for use as an administration block for the oil jetty constructed on the site to provide bunkering facilities for navy vessels.

Returned to its owners after the war, it prospered as a hotel until the site was taken over by the Anglo Iranian Oil Co.

The building is listed in the Buildings at Risk register, together with an associated lodge abandoned at the side of the A814. Both are shown as Crown property owned by the Ministry of Defence.

Arddarroch House, also attributed to William Burn, is a substantial gabled villa built in 1838 for John McVicar, a Glasgow merchant, and was altered and extended with the addition of a conservatory (now demolished) in 1846-7 by David Bryce, a pupil of Burn.

The house now forms offices and accommodation for the oil terminal, with an associated lodge at the side of the A814 serving as a gatehouse.

Just north of Finnart is the MOD jetty at Glenmallon, and from time to time some very large naval supply ships berth there.