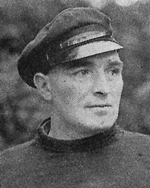 ONE of the Firth of Clyde’s worst disasters took place in 1947 when an open pleasure boat sank off Rosneath Point, and twenty men, women and children were drowned and only three were saved.

Pleasure sailing was resuming in the waters where the convoys of grey ships had gathered in wartime, and a motley fleet of small boats, left by the navies of the world, became pleasure boats.

One of them was the Ocean Swell, a converted naval liberty boat which her owner, John Travers of Greenock, used as a weekend cruising launch.

His family and friends had a regular Sunday jaunt sailing over into Loch Long for a picnic on the shore at Ardentinny. On Sunday September 14 that trip was to end in tragedy.

But after they left the jetty at Port Glasgow it became overcast and the wind freshened, so they decided to head for the calmer waters of the Gareloch.

Before they got there the south-westerly wind strengthened again, and Mr Travers decided to put his wife and their 11 year-old daughter ashore at Helensburgh pier before the Ocean Swell headed past Kidston Park into the loch.

The new destination was Garelochhead, and the motor boat tied up at the village pier. There they picked up two extra passengers, David Johnstone and Lawrence Dalerio from Greenock.

David and Lawrence had carried their bicycles on to the ferry for Kilcreggan, planning to cycle north along the Rosneath Peninsula to Ardgartan on the Loch Long shores beyond Arrochar.

But as the weather deteriorated they gave up that idea and stopped off at Whistlefield.

Later in the afternoon they cycled back to Garelochhead, where the hotels were open for Sunday drinking. They asked if there was a boat going back to Greenock and were offered a sail home on the Ocean Swell, which they gratefully accepted.

The Ocean Swell left Garelochhead pier at about 4pm. It was raining heavily in the high wind, and the passengers sought shelter under three canvas awnings.

It was cold and wet, and there were big waves the vessel made her first attempt to round the Bell Buoy off the Green Isle.

The party decided to sail back and seek temporary shelter in the calmer waters of the Mill Bay near the caravan site. But as time passed they try again to cross to Greenock.

Suddenly the 20ft boat began to take in water over the canvas covering the bow.

Passengers shouted to those sheltering in the bow to come back to the stern. The boat was bow-heavy and was refusing to rise to the waves.

However the passengers stayed where they were, clutching each other in fear. Many could not swim.

Then suddenly the frantic shouts were too late. A wave broke again, and the Ocean Swell sank. Her engine still running, she was swamped.

Women and children were thrown into the icy water. Others were trapped beneath the canvas as the boat went down.

One man clutched a petrol can. Others clung to driftwood and lifebelts. A survivor said afterwards: “The water was so high that it looked like a tidal race.”

Although two small craft passed nearby shortly before the sinking, they were unaware that help was needed. Half an hour passed before help came.

When the MFV 134 hove into sight the whole area was strewn with bodies. A large white yacht, believed to be an eight metre, was manouvering frantically to reach those still alive in the water, but she could not get close enough.

Only three people — more dead than alive — were clutching debris in the water.

The skipper of the MFV, Jimmy Jardine of Feorlin Way, Garelochhead, said later: “We had a day off that Sunday, and we were out for a sail with our families. We could barely hear the shouts of the survivors over the noise of the wind.

“The motor boat had come round the Point when the wind and the tide were fighting each other, and that is what causes the turmoil in the water. It wasn’t a particularly bad gale — if only they had waited another hour.”

The ex-Admiralty skipper, who later worked with Garelochhead Coach Services, was at the helm of his 65ft vessel, and among his crew were some of the Mundie family from Helensburgh, John, George and Peter.

Peter said: “I will never forget seeing the people in the water. We flung a heaving line out.

“I was held by the seat of my pants over the steep side of our boat, and managed to grab a woman. We saw her baby in the water, but before we could reach it, it had disappeared.

“We pulled two men and this woman on board. Then we got the woman’s mother-in-law. She was in a bad way. We tried artificial respiration, but she was too far gone.”

By a twist of fate the two male survivors were the two cyclists who had joined the boat at Garelochhead. Their cycles, strapped across the bow, went down with the Ocean Swell.

The MFV circled the area several times looking for more survivors, but there was no-one left alive in the water, and she steamed for Helensburgh pier where they raised the alarm.

An ambulance took the survivors to the Victoria Infirmary, where they gasped out their tragic story of how 20 people had drowned.

Among those who had perished — all from Greenock and Port Glasgow — were almost an entire family, a middle-aged couple, their son and two daughters, and their infant grandchild.

A young soldier, home on leave to see his sick father, was drowned with his sister. The victims were men from 15 to 57 and women from 20 to 60.

The bodies of two young girls were washed ashore that night near Meikle Ross on the Point. From Kilcreggan to Rosneath naval patrols and police searched. A naval launch picked up a young girl, but she died soon afterwards.

For several weeks the bodies of those who had perished were washed up at Helensburgh, and as far away as Cardross and Inverkip.

Of the eleven bodies believed to be trapped inside the motor boat, only one — the body of a young baby — was never found.

At the time of the accident German prisoners-of-war were still in a camp at Stuckenduff, near Shandon. They sent a wreath to the Memorial Service held in Greenock for those who lost their lives.

Disaster funds were set up in Clydeside towns to assist the dependants of those who had lost their lives.

Some weeks later Skipper Jardine received a letter of deep gratitude and £5 from the two Greenock cyclists his MFV had rescued. He kept the letter as a memento, and for many years afterwards also received Christmas cards from the men.

The Registrar for the Parish of Rosneath at that time was Alex Douglas, who was also the headmaster of Helensburgh’s Clyde Street School.

It was to his hands that the job fell of making the largest entry of sudden deaths ever known to have occurred in the local Parish on one fateful day.

The previous biggest such disaster in the Firth was in 1864, when catastrophe befell a Clyde ferry which was swamped by the wash from the paddles of the steamer Inverary Castle, and 19 people were drowned.